Tricky Replacement Brings Peace of Mind
Shuttle program managers can breathe a collective sigh of relief now that a delicate procedure has been completed: the replacement of some very hard-to-reach but crucial bolts on Space Shuttle Atlantis.

Over the weekend, on Launch Pad 39B at NASA's Kennedy Space Center in Florida, workers completed the difficult task of replacing two of four actuator bolts holding Atlantis' main communications antenna in place. 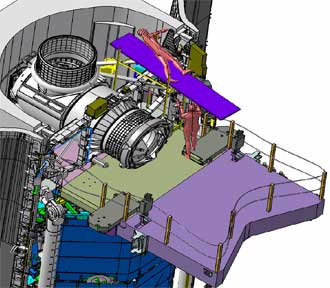 The repair job required building a special platform so the workers could reach the top of the space shuttle's 60-foot-long payload bay. This enabled technicians to successfully remove the two shorter bolts securing the antenna and install longer ones.

Image at Right: This illustration shows how technicians conducted the tough job of replacing the actuator bolts while Atlantis was on the launch pad. Image credit: NASA

Shuttle managers decided on Friday to change out the bolts as a precaution. They were concerned that a bolt failure during the vibration at liftoff could send the antenna careening down through the payload bay, striking the truss segment headed for the International Space Station.

The bolts in question actually attach a piece of hardware called the Antenna Deployment Actuator to the orbiter structure; the communications antenna sits atop the actuator. The bolts that were replaced had been in use aboard Atlantis for the last 20 years.

Image at Left: Sample actuator bolt like those replaced on Space Shuttle Atlantis is shown. The bolts attach the Antenna Deployment Actuator to the orbiter inside the payload bay. Image credit: NASA

Ground operations teams had to construct a thin platform, inserted between the top of the payload and hatch airlock, to get to the right-hand corner of the payload pay. During a discussion last week regarding the possible replacement, Space Shuttle Program Manager Wayne Hale described the working platform as similar to tying a surfboard on one end and extending it over a six-story balcony.

With the bolt replacement successfully completed, launch preparations continue toward the liftoff of Atlantis on Aug. 27 and the return to construction of the International Space Station.