Bye Bye, Birdies
Birds come with the territory at NASA's Kennedy Space Center in Florida, which usually doesn't mind when any of the nearby Merritt Island National Wildlife Refuge's 310 species of birds swoop through for a visit.

But one particular type of bird is causing concern: vultures. 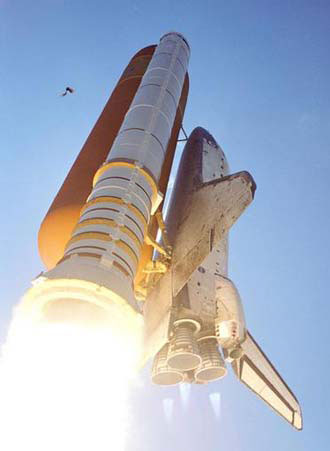 That's why NASA plans to test special radar to track any vultures around Launch Pad 39B during the countdown to liftoff of Space Shuttle Discovery on mission STS-121.

Image at Left: In the wrong place at the wrong time, a bird is silhouetted against the clear blue Florida sky (upper left) as it falls away from Space Shuttle Discovery after hitting the external tank during liftoff of mission STS-114 in July 2005. NASA hopes an avian radar detection system will help avoid such strikes in the future. Image credit: NASA

While birds might seem harmless, there's a good reason for the concern. During the July 2005 launch of Discovery on mission STS-114, a vulture soaring around the launch pad impacted the shuttle's external tank just after liftoff. With a vulture's average weight ranging from 3 to 5 pounds, a strike at a critical point on the shuttle -- like the nose or wing leading thermal protection panels -- could cause catastrophic damage to the vehicle. The foam chunk that fatefully struck Columbia's wing in 2003 weighed only 1.7 pounds.

As a preventative measure, a bird abatement program has been under way at the center to limit the possibility of a future bird strike on liftoff. One aspect of the program has been to rapidly remove "roadkill" around Kennedy, eliminating an easy food source that keeps the birds around. Workers already have tried using noise deterrents at the launch site, but determined this had little effect on the vultures. A trap-and-release effort is planned for launch day. 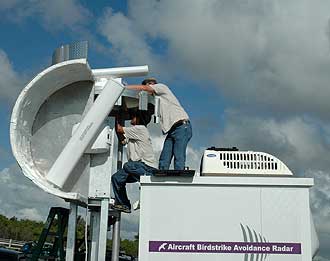 But by far the best final line of defense is bird detection radar, already proven effective for aviation, where the threats posed by bird strikes have long been a problem.

Image at Right: The avian radar in position at Launch Complex 39 offers the ability to monitor either of the two shuttle launch pads during a countdown. Technicians adjust the system's two customized marine radars that provide both horizontal and vertical scanning. Image credit: NASA

The vultures are more active during the day as they search for food and circle high into the bright blue Florida sky, soaring on the thermal gradients. To mitigate the danger, an avian radar system known as "Aircraft Birdstrike Avoidance Radar" is in position to track their movement around the launch area and relay the data to launch control experts. The system was developed by a company called DeTect of Panama City, Fla., which primarily has served the commercial aviation industry and the military. 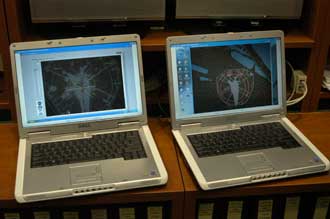 Image at Left: Inside the Launch Control Center at NASA's Kennedy Space Center, data relayed from the avian radar (right laptop) aided by camera images (left laptop) will help controllers recognize when any large birds are in dangerously close proximity to the vehicle and hold the countdown when necessary. Image credit: NASA

The goal is to provide the launch team with real-time detection for on-the-spot launch decisions up to one minute before liftoff. To do that, the system uses two customized marine radars -- one for horizontal scanning and one for vertical scanning. While vultures have been identified as the main threat, the radar system has enough power to detect even small birds.

The launch of Discovery will provide the first test for the technology during an actual shuttle launch. If the test proves successful, the unit's location will allow it to monitor either of the launch pads at Launch Complex 39 during future space shuttle launches, providing a new margin of safety for astronaut crews.