Communication From Space Inspires Young Minds
Students take a microphone in hand and start speaking into it.

They're not making an announcement over their school's PA system; they're talking with crew members aboard the International Space Station. For an incredible few moments, students communicate with the space inhabitants, asking questions about what it's like living and working in space.

Amateur Radio on the International Space Station, or ARISS, is a program supported by a team of volunteer radio operators formed to build and operate radio equipment to facilitate communication between the orbiting outpost and Earth. 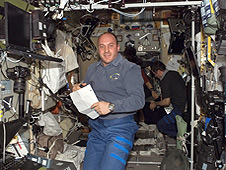 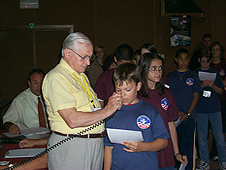 Students attending space camp at the Euro Space Center in Belgium are gathered in an auditorium to speak with Astronaut Ed Lu, on board the space station during Expedition 7. Photo credit: NASA
› High-res Image 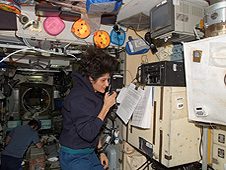 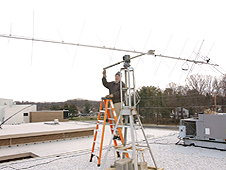 ARISS volunteers of the Goddard Amateur Radio Club set up a relay station on the roof of Bowie High School in Bowie, Md, to give students the opportunity to talk with astronaut Bill McArthur on the International Space Station. Bob McCown is adjusting a high-gain antenna that will follow the orbit of the space station as it moves across the sky. Photo credit: Courtesy of the Goddard Amateur Radio Club
› Larger Image 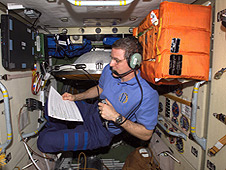 
Since the discovery of wireless transmission, amateur, or ham radio operators, as they're often called, have been able to reduce the expanse of the globe by talking with radio enthusiasts in other countries who share their hobby.

Amateur radio communication dates back to the early 1900s, in the infancy of wireless radio. Thanks to ham radio, many astronauts and cosmonauts can feel more connected to home and Earth while in space.

Sponsored by NASA, the American Radio Relay League, or ARRL, and the Radio Amateur Satellite Corporation, or AMSAT, ARISS affords students the opportunity to develop their interests in technology, science and the space program.

Since 1983, dozens of astronauts have used the Space Shuttle Amateur Radio Experiment, or SAREX, a forerunner to ARISS, to talk with thousands of students from their temporary home in space.

Rita Wright, a former science teacher from the Burbank School in Illinois, is now a full-time ARISS team member. Wright recalls the first attempt at contacting the International Space Station in December 2000.

A dedicated ARISS team worked hard to set up the antennas in sub-zero temperatures during a snow storm. Unfortunately, the connection couldn't be made that day.

Two days later, even as bad weather conditions continued, the auditorium filled with students, teachers and parents. "The atmosphere was ripe with excitement," said Wright.

As the space station orbited almost directly overhead, the connection was made and everyone heard the voice of NASA astronaut and Expedition 1 Commander William Shepherd come through loud and clear.

Fourteen students posed their pre-written questions to Shepherd before the station slipped over the horizon and out of radio range. In the spring of the next year, an invitation was extended to Shepherd to visit the Burbank School, which he graciously accepted. Students, teachers and parents alike were captivated by Shepherd's talk about his time in space.

"Our students found a treasure in Commander William Shepherd, who took the time to talk to a group of junior high and elementary students in a small school in a small community. He touched their lives and opened their eyes to a whole new world of opportunities and new career possibilities," Wright recalled.

Tony Hutchison, Australia's national ARISS coordinator, visited his hometown of Bordertown to set up a telebridge* linkup from the Bordertown Primary School to the space station. Nearly 500 students and guests, along with local TV and news media, overflowed the school's library and poured out into the yard as 15 students asked NASA astronaut Dan Bursch their questions.

"Thanks to the worldwide ARISS program sponsored by NASA, ARRL and AMSAT, small schools in the outback of Australia are now able to take part in this unique experience as well," said Hutchison. "To see the look on the faces of these young students as the astronaut's voice first comes out of the speaker is truly overwhelming."

It's not only students who benefit from communication with NASA astronauts.

Kenneth Ransom is the space station ham radio project engineer liaison between ARISS and NASA at Johnson Space Center in Houston. Ransom recently coordinated a call between NASA astronaut and Expedition 16/17 Flight Engineer Garrett Reisman and young patients at the Arnold Palmer Hospital in Orlando, Fla. The hospital is a facility for children with life-threatening health challenges.

"The youngsters were all smiles," said Ransom. "The call lifted their spirits and took their minds off their condition for that period of time."

Working through representative space agencies, ARISS has repeated this scenario thousands of times in the United States, Russia, Japan, Europe, Canada and many other countries.

NASA astronaut and Expedition 12 Commander Bill McArthur has been an avid ham radio operator since he was introduced to the hobby in high school. McArthur brought this enthusiasm with him when he joined NASA's astronaut corps.

One of the highlights of McArthur's operator history was the honor of speaking to Princess Elettra Marconi (no relation to the writer), youngest daughter of Guglielmo Marconi, from the space station through the ARISS program in Italy. Marconi was the pioneer of wireless transmission.

"Speaking to a relative of the inventor was quite a thrill," said McArthur.

The ARISS program receives high marks from McArthur. "Amateur radio gave me a greater sense that space exploration is a truly international endeavor, and more than that it's exciting internationally," said McArthur.

"What makes the program work is not what we do on the space station; but the individuals who go into schools, set up the equipment, teach students about radio and spaceflight and then allow us to talk to the young people."

It appears that no other hobby has the ability to enhance international relations and bring people closer together quite like the ARISS amateur radio program.

* A telebridge is where a dedicated ARISS amateur radio ground station located somewhere in the world, establishes the radio link with the space station. Voice communications between Earth and astronauts are then patched over regular telephone lines.