Grow Text SizeShrink Text Size
New Antenna May Reveal More Clues About Lightning
Launch scrubs are nothing new at NASA's Kennedy Space Center. In fact, there have been 116 space shuttle scrubs; 72 for technical reasons and 45 for inclement weather.

During the summer, bad weather, particularly lightning, seems to strike as the countdown clock nears zero. Maybe it's because Kennedy and Cape Canaveral Air Force Station are well within what meteorologists call, "Lightning Alley."

But according to Professor Tom Marshall of the University of Mississippi, humans have yet to truly figure out lightning. 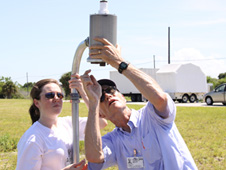 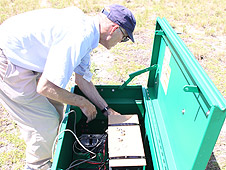 So, Marshall and one of his senior students, Lauren Vickers, visited Kennedy to test a new antenna that might someday measure the level of individual lightning flashes and their return strokes. A measurement that could give launch managers information to make their "go-no go" decisions easier... decisions that might save money.

"We're trying to extend some measurement of cloud-to-ground lightning here at Kennedy," Marshall said. "We may find a return stroke is larger, and therefore, one for us to target."

The strength of these strokes might someday determine if future launch vehicles, such as Ares I, must undergo testing if lightning strikes nearby.

"What Professor Marshall's work is going to enable us to do is determine more precisely than we can now exactly where charges are located in clouds and how big those charges are when lightning strikes," said Dr. Frank Merceret, director of research for the Kennedy Weather Office. "The problem lies in the fact that NASA does not know where the charge center is located in the clouds.

"The Lightning Advisory Panel (LAP), which develops and recommends our lightning launch commit criteria (LLCC), has been wrestling with that issue for quite some time and his project may give the panel information that will help provide more accurate lightning readings before a launch."

A launch vehicle traveling through an anvil cloud, a cloud mostly made of ice that forms on top of thunderstorms, can trigger lightning at much lower electric field levels than natural lightning requires. This triggered lightning can damage vehicles or its cargo. In 1987, an Atlas-Centaur rocket was destroyed when its launch triggered such lightning. To prevent such accidents, the LLCC -- a strict set of lightning avoidance rules -- was modified by the LAP.

The LAP, which is made up of top lightning experts from various government agencies and academia, continues to review and modify those criteria for both the Eastern and Western ranges.

Although some launch weather guidelines involving shuttles and expendable rockets may differ because a distinction is made for the individual characteristics of each, the LLCC are identical for all vehicles.

"If the shuttle is on the launch pad and a lightning strike occurs nearby, we need to know the distance from the shuttle and the intensity of the lightning to determine if there are any possible effects on the vehicle. If the lightning was close enough and intense enough, operations, including a launch, will be delayed so the team can ensure the shuttle was not damaged," said Kathy Winters, shuttle launch weather officer.

The basic weather launch commit criteria on the pad at liftoff that must be met are: temperature, wind, precipitation, lightning (and electric fields with triggering potential), clouds, supporting table, range safety cloud ceiling and visibility constraints.

During shuttle launch countdowns, weather forecasts are provided by the U. S. Air Force Range Weather Operations Facility at Cape Canaveral beginning at launch minus three days in coordination with the NOAA National Weather Service Space Flight Meteorology Group, or SMG, at the Johnson Space Center in Houston. These include weather trends and possible effects on launch day.

A formal prelaunch weather briefing is held on launch minus one day to discuss specific weather conditions for all areas of shuttle operations.

Forecasts that apply after launch are prepared by SMG. These include all emergency landing forecasts and end-of-mission forecasts presented to the flight director and mission management team.