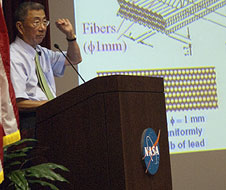 Image above Professor Sam Ting, AMS Principal Investigator from the Massachusetts Institute of Technology, said he doesn't know what the instrument will find, but it is expected to test several aspects of theories about the origin and structure of the universe. The experiment, which studies cosmic rays, may also reveal the nature of dark matter. Photo credit: NASA/Jim Grossman
› View larger image 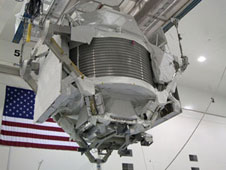 Image above: The intruments in the AMS are sensitive enough to pick up cosmic rays passing through it even as the instrument sits in the Space Station Processing Facility at NASA's Kennedy Space Center in Florida. Photo credit: NASA/Jack Pfaller
› View larger image

The Alpha Magnetic Spectrometer-2 (AMS) destined for the International Space Station already is collecting cosmic ray signatures, even as it sits in a work stand at the Space Station Processing Facility at NASA's Kennedy Space Center in Florida, said Prof. Samuel Ting, the principal investigator for the program.

It ‘s not making any grand discoveries yet, since the particles it is picking up were stripped of some of their qualities when they passed through Earth's atmosphere. But once in place aboard the space station, the 7 1/2-ton AMS will see charged particles as they exist in the vacuum of space.

Space shuttle Endeavour is to carry the AMS to the station in February 2011, and mount it on the truss that holds the orbiting laboratory's main solar arrays.

So what does Ting expect the AMS to find? Speaking to a standing-room-only audience for the Kennedy Engineering Academy on Oct. 19, Ting said he doesn't know what the detector will find.

Ting won the Nobel Prize in Physics in 1976 along with Burton Richter for their discovery of a heavy elementary particle.

Though he doesn't know exactly what to expect, Ting has several ideas of what he hopes to find using the AMS, including the possibility that it opens up an entirely new field of particle physics. Up until now, he said, the study of cosmic rays has been limited to measuring light using telescopes and instruments like those on NASA’s Hubble Space Telescope.

The AMS is to be the first to study charged particles in space, he said.

One of his desires is that the particles recorded by AMS prove the existence of a parallel universe made up of anti-matter, or particles that are, in electrical charge and magnetic properties, the exact opposite of regular particles. Such a universe has been theorized, but not proven. The discovery of massive amounts of anti-matter could answer fundamental questions about the universe's origin.

"Unless you do the experiments, you don't know who is right," Ting explained.

Ting is also searching for proof of what makes up dark matter, the theoretical material that is thought to make up a large part of the universe. Also, AMS may point out whether all matter in the universe is made up of the same two kinds of quarks that make up all the known matter on Earth.

Designing such an experiment, especially one that works in the harsh and unforgiving environment of space, did not happen quickly and Ting says he was taken aback by how difficult it was.

Although new particle accelerators were being built on Earth, Ting said he set out to study cosmic rays in space because, "no matter how large an accelerator you build, you can't compete with space."

Ting's work on AMS started in 1994 with a meeting with then-NASA Administrator Dan Goldin. The project grew from there to incorporate more than 500 physicists in some 16 nations around the world. Mostly built in Europe and Asia, the AMS effort also received help from its project office at NASA's Johnson Space Center and from the Department of Energy.

The experiment is filled with cutting-edge technology. It relies largely on a ring of powerful magnets that influence the particles as they move through the AMS. The magnets were changed after Ting's team opted to replace the superconducting versions that would last three years with magnets that did not need to be cooled but would let the experiment run many years longer, possibly as long as the space station itself is operational.

A series of detectors will pick up the ray's movements, in particular how their paths change as they pass through the magnets. Ting said different particles leave unique signatures that researchers will comb through to determine how much anti-matter exists and the nature of it.

The device also requires specialized electronics that run 10 times faster than current space electronics. The electronics have to be so much faster because the cosmic rays AMS will detect move so fast.

The AMS detector was tested in a couple ways. First, a smaller prototype was flown on board space shuttle Discovery in 1998 to prove the concept would work. Shortly before being flown to Kennedy, the AMS-2 was placed in the Large Hadron Collider at Cern, Switzerland. The particle accelerator, the world's largest, was used to help set up the AMS instrumentation.

Buoyed by extensive support in the scientific community, Ting said he was able to overcome numerous sticking points along the way to get the AMS-built and ready to launch on a shuttle.

"If people believe in you, they will find a way to support you," he said.