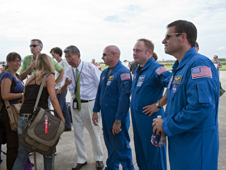 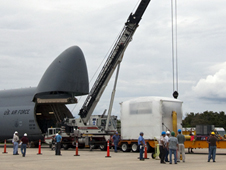 Image above: Workers begin to offload the Alpha Magnetic Spectrometer, or AMS, from an Air Force C-5M aircraft, which flew in from Europe. Photo credit: NASA/Jack Pfaller
› View larger image 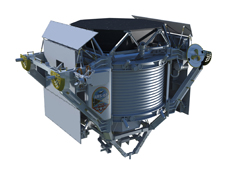 A new experiment designed to reveal the origin and structure of the universe has reached its last stop on Earth before it’s set to ride into orbit aboard space shuttle Endeavour early next year.

The long-awaited Alpha Magnetic Spectrometer-2 (AMS) arrived Aug. 26 at NASA's Kennedy Space Center in Florida, secured in the belly of a U.S. Air Force C-5M cargo plane that arrived at the launch center with a late-morning touchdown on the shuttle's runway.

"I'm very pleased to be here," Ting said as he waited for the experiment's arrival. He was joined at the runway by several members of the international AMS team and the STS-134 astronaut crew.

Boasting a large magnet and state-of-the-art particle detector, AMS will use its lofty vantage point on the International Space Station's main truss to measure cosmic rays with unprecedented sensitivity and accuracy. In addition to a better understanding of cosmic radiation -- a major challenge of long-duration spaceflight -- the instrument could uncover evidence of mysterious dark matter or missing antimatter, discoveries that would help answer lingering questions about the universe and its beginnings.

"Over the last 50 years, all our knowledge about space has come from measuring light rays," Ting explained. "Hubble Telescope is a good example. But besides light rays, there are charged particles: electrons, positrons, protons, antiprotons, helium, and antihelium."

Ting and his scientific team believe that the best chance to detect these particles is in space, before they have hit Earth's atmosphere.

"And because it carries a charge, you need a magnet," he added.

Because AMS is the first experiment of its kind to fly in space for a long period of time, anything learned from it will be new knowledge.

"Nobody has really measured the charged-particle field precisely," Ting said. "So you enter into a new field."

AMS is expected to operate for the rest of the station's life, at least 10 years.

"It's a really neat design and as an astronaut, I appreciate the elegance of it," said Fincke. During the flight, the Endeavour astronauts will use the shuttle's robotic arm to remove AMS from the payload bay and hand it off to the station's arm.

"We're going to put it right on the space station. No bolts required, no human intervention," he explained. "Box Johnson's going to hit a couple buttons, and it's going to be captured automatically. The two umbilicals for power and data are going to stretch right in, and it'll be up and running."

Sponsored by the Department of Energy, AMS-2 was developed by an international team of 56 scientific institutions from 16 countries. The roughly 15,000-pound experiment was built and tested at the European Laboratory for Particle Physics, or CERN, in Switzerland.

"It shows you can bring together 500 physicists, engineers and technicians into a collaboration, build an experiment, launch it to the International Space Station, operate it for an extended period of time and hopefully get extremely exciting data that tells us something about the origins of the universe," Martin said.

Several members of the international AMS team gathered at the runway, excited to see the product of so many years of hard work finally on the ground at Kennedy. A cheer, followed by the clicking of camera shutters, met the cargo plane as it rolled onto the runway's parking apron for offloading.

Still in its packing crate, the 15-foot-wide, 13-foot-tall experiment was carefully removed from the cargo plane and transported to Kennedy's Space Station Processing Facility, where it will undergo final testing and integration before it's deemed ready to fly.

"We have our online testing that we have to do, which is basically making sure it works with the space station, making sure it can talk to the orbiter," said Joe Delai, payload mission manager for STS-134. "That should bring us to about the end of October, and in between October and February, the AMS folks will be calibrating their sensors. Then, we're ready for launch in February."

That's a sentiment shared by the entire team, including the STS-134 astronauts, who will have trained for this mission for about a year and a half when Endeavour is targeted to launch in February 2011.

"It's fitting that on its (Endeavour's) last assembly mission, the space station is going to be complete," STS-134 Commander Mark Kelly said. "It's Important to note it's going to be completed with a very complex and, hopefully, very successful physics experiment. We look forward to seeing the results that Dr. Ting is going to produce over the next decade."
Anna C. Heiney
NASA's John F. Kennedy Space Center
› Back To Top