Discovery: Then and Now
Times change, people change, and even orbiters and astronauts change. 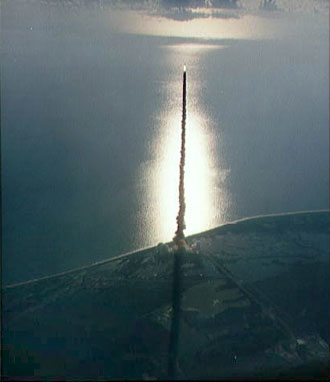 As Discovery stands ready to be the "go-to" shuttle for the next mission, an astronaut who flew on Discovery's first flight will be with them in spirit. "You always transport yourself back to that moment when you were inside and it does get your heart rate up," says Mike Mullane.

The year was 1984. Discovery sat on Launch Pad 39-A at NASA's Kennedy Space Center in Florida, awaiting its maiden voyage. Five of the six crew members were rookie astronauts primed for their first trip into space, including Mullane. After several delays, together the new orbiter and space travelers embarked on a successful 2.5-million-mile journey.

Image at Right: On Aug. 30, 1984, Discovery rises from its seaside launch pad and is silhouetted against the sun's reflection on the Atlantic Ocean surface as mission STS-41D begins. Image credit: NASA

"It was a particular thrill for all of us to pass the 50-mile altitude because that's the point at which you are officially an astronaut," says Mullane, now an author of a book called "Riding Rockets" that details his experience in space. "We broke into cheers. At that point, we were no longer rookies; we were veteran astronauts." 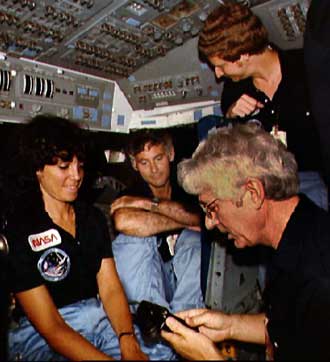 More than two decades later, Mullane figures the anticipation of today's rookies, including the three set to fly on the upcoming STS-121 mission, is the same. Yet time has brought about definite changes -- both in the orbiters and in the diversity of the astronauts who fly them.

Among the crew who flew that first flight of Discovery was one woman, Mission Specialist Judy Resnick, who was only the second American woman in space.

NASA's next shuttle mission counts two women among its crew, and Mullane feels the status of women as astronauts today has changed significantly since Resnick's first flight.

"The aura of being a feminist pioneer has long past. It's not newsworthy anymore that a woman is flying," he reflects. "There are lots of female astronauts out there."

After all, the STS-114 Return to Flight mission in July 2005 was commanded by Eileen Collins. 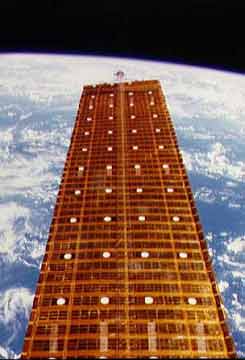 Just as the makeup of the astronaut corps has changed, so has its work in space. Building the International Space Station is now the primary focus of the remaining shuttle missions, but the hardware that would bring the space station to life was just being developed when Discovery first flew. As part of that inaugural mission, the crew tested a "solar wing" that carried different types of solar cells. It was extended from the payload bay to its full 102-foot height several times, demonstrating that large, lightweight solar arrays could be viable for building future facilities in space -- a reality in today's International Space Station.

Image at Right: In this photo taken from Discovery's window by the STS-41D crew, the extended solar array experiment panel is deployed. Image credit: NASA

Many of the changes experienced by the astronauts have been mirrored by Discovery.

Beginning in the fall of 1995, the shuttle underwent a nine-month maintenance period that included the addition of an external airlock to support its new role on missions to the International Space Station. In 2002, along with scheduled upgrades, technicians began making additional safety modifications as part of the preparations for the Return to Flight.

Since its inaugural flight in 1984, Discovery has completed more than 30 successful missions, 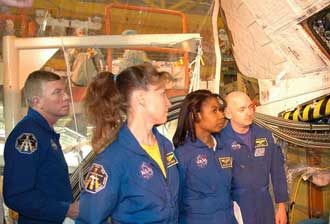 surpassing the number of flights made by any other orbiter in NASA's fleet.

With the shuttle flights coming to an end and the new Crew Exploration Vehicle (CEV) on the horizon, Mullane's thoughts turn to what it would be like to help write the next page in space exploration history.