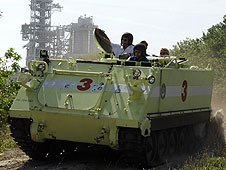 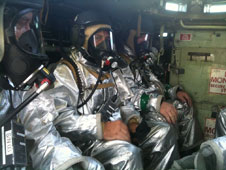 A squad of firefighters sits ready for an emergency as liftoff approaches for the STS-131 mission. The air packs, masks and protection suits each firefighter wears highlights the cramped conditions inside the M113. Photo credit: NASA/David Seymour
› Larger image 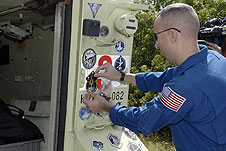 Rumbling, cramped, heavy and lacking a big field of view, the M113 wouldn't seem to be a good candidate for an ambulance. It doesn't even have a steering wheel. But it has something essential for a NASA rescue mission at the launch pad: armor.

Basically a bunker on tracks, the M113 is a Vietnam-era armored personnel carrier that offers the astronauts a safe vehicle to get out of danger. It also offers firefighters heavy protection in case they have to go into danger to retrieve the flight crew and launch pad personnel.

"These things are virtually indestructible," said David Seymour, battalion chief and the lead for the pad rescue team at NASA's Kennedy Space Center in Florida.

"We never know what to expect, we always prepare for the worst," said Alan Myer, an M113 driver and firefighter.

Emergency crews can set out for the launch pad inside one of the carriers and know they will be able to get to the fixed service structure safely. They also can retrieve people and take them to safety in the M113.

"We're here for the astronauts, for the closeout crew, whoever's up there," Seymour said.

NASA began using surplus Army M113s during the Apollo Program in case an emergency developed with the spacecraft or the gigantic Saturn V rocket. They serve the same role for the shuttle.

Three are on hand on launch day. Two stand by less than a mile from the launch pad, each with a complement of firefighters on board. A few minutes before liftoff, the firefighters get inside wearing all their gear, including silver protection suits, an airpack and an air mask. They close all the hatches and raise the back ramp.

The inside of the M113 is hardly spacious, so the firefighters have to curl their legs up tight. Only the driver can see out consistently, looking through four slits facing the pad. The others in the vehicle have to take turns looking through the slits in another hatch, but that means awkwardly trying to kneel or stand in the middle of the rest of the crew.

Most of the firefighters feel the launch more than see it because the thunder thoroughly shakes the 10-ton armored personnel carrier.

If an emergency call comes in before launch, the driver runs in and gets the vehicle moving in seconds, letting one of the other crew members work the lever to lift the ramp.

The astronauts and pad workers have limited air sources, so the rescue teams work to get them to safety in less than 10 minutes from the time they get the rescue call. They constantly train and adjust methods to shave off seconds. They also prioritize everything they do.

"I don't care about anything except getting my guys on the pad surface safely," Myer said. "If I run over signs, I don't care. I will not drive through a building, because that could hurt us, but if I have to drive over these logs protecting the crawlerway, I don't care. I want to get them to the pad in one piece as fast as we possibly can."

The other M113 sits empty with its back ramp open facing the door of an emergency bunker near the pad. If the astronauts have to take the slidewire baskets to get away from the pad, they would get out of the baskets and into the bunker. Then they can get inside the M113, close the ramp and drive to safety.

That's the routine all crews practice during the Terminal Countdown Demonstration Test, or TCDT. The STS-134 crew took part in the training March 30 as they prepared to launch on space shuttle Endeavour's last scheduled mission. The driving is a required course for each shuttle astronaut.

"Everybody has to drive the M113, so everybody kind of has to find their feel for maneuvering it," Seymour said.

Finding the feel for the M113 means adjusting to steering with a pair of levers instead of a wheel. Each lever controls one of the tracks on the M113. Push both of them forward and the vehicle goes forward. There's a gas pedal to determine how quickly it goes. Pull the right lever to turn right, pull the left lever to go left. Pull them both back to stop. Don't do it too hard, though, or everyone riding along will get thrown into the metal bulkheads. After all, there's no padding on the thick metal walls, corners or shelves.

For example, Seymour said one of the astronauts was driving the M113 during training down a path carved out near Launch Pad 39B. A row of wild boars moved across the path about 100 yards ahead and the driver jerked the levers back so hard the vehicle came to a skidding halt and the rest of the crew, riding in the metal box and sitting on the thinly padded benches, flew forward. But the pigs weren't hurt.

The limited field of view comes from four slits in front of the driver, each one a prism instead of an opening. With the driver's hatch down, it can be tough to make out everything around the vehicle while it's in motion. That's why the vehicles have gotten wet a couple of times by accident. Not to worry, though, it's amphibious. The Army designed it to float and drive through rivers and the like.

Some flight crews embrace the unusual vehicle and have a good time with the training, Myer said.

Seymour and Myer say they accept that it's unusual for people to want to work as firefighters, to want to train to run into bad situations and to wear bulky equipment and drive huge metal boxes on tracks, which is what the M113s are.

"There's nothing normal about a firefighter," Seymour said, laughing. "I told my dad one time that when I grow up, I want to be fireman. He looked at me, shaking his head smiling and said, 'You can't do both. You can't grow up and be a fireman.' "

The fun aspect for the firefighters does not obscure the seriousness with which they train for emergencies. Considering part of their job requires them to climb into the orbiter and pull the astronauts out of their seats on the flight deck.

"We want to give the astronauts , close-out crew and ice inspection team the comfort to know that when called we are going to be there no matter what happens," Seymour said.