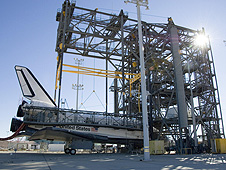 Endeavour is nestled in the Mate-DeMate Device as preparations are under way for its ferry flight. Photo credit: NASA/Tony Landis
› High-res Image 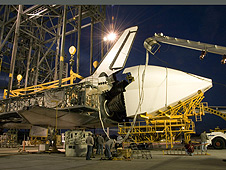 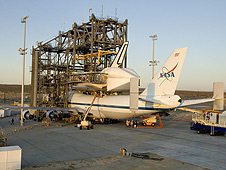 Endeavour was lifted off the ground and placed atop a modified Boeing 747 carrier aircraft for the piggyback ride back to Kennedy. Photo credit: NASA/Tony Landis
› High-res Image 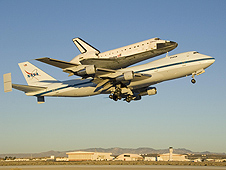 Endeavour atop the carrier aircraft lifts off from Edwards Air Force Base on the first leg of its ferry flight back to Kennedy. Photo credit: NASA
› High-res Image

Don't let the desert fool you. It's not always hot. In fact, in California's Mojave Desert where NASA and contractor employees are processing space shuttle Endeavour, it's freezing.

"It's 32 degrees out here," said Ken Tenbusch, Endeavour flow director. "Not easy when your teeth are chattering."

One of the major differences in processing at NASA's Kennedy Space Center in Florida and NASA's Dryden Flight Research Center in California is location.

Within hours of landing at Kennedy, Endeavour would have been towed into one of the center's orbiter processing facilities -- a place where technicians have all of the resources they need right at their fingertips. But at Dryden, Endeavour is processed outdoors at the Mate-Demate Device with limited resources.

"Processing outdoors offers many challenges," Tenbusch said. "Over here, you are completely open to the environment. The wind comes right off of the mountains and if it rains, you're getting rained on."

The way orbiters are processed is different, too.

At Dryden, crews basically have to winterize the vehicle before it's bolted to a 747 jumbo jet called the Shuttle Carrier Aircraft. Technicians power the orbiter down, safe all the hypergolic propellants and fuel systems, drain the water systems and close the nose and landing gear doors. Then, they install a large cone on the tail of the orbiter, which helps smooth the airflow around it during the ferry flight.

"In order to do that, you have to manipulate the engines and bring them together so the cone will fit over the top of them," said Randy Goodmon, Endeavour flow manager.

To perform these turnaround operations, about 250 NASA and contractor employees are working around the clock. Meanwhile, there are several systems engineers at Kennedy who can't wait to get their hands on Endeavour.

"You can explain and send pictures -- but it's clearly not the same as being next to the hardware," Tenbusch said.

Tenbusch and Goodmon say Endeavour appears to be in good shape. They even commented on the window that was hit by a meteor while orbiting Earth.

"The window is fine for the flight back to Kennedy," Goodmon said. "But it will be removed and replaced before Endeavour's next mission."

Even with the challenges, Tenbusch says his turnaround team is doing a great job preparing Endeavour for its piggyback ride to Kennedy.

And while many wonder if landing in California put Endeavour behind schedule for its next mission, targeted for May 2009, Tenbusch remains optimistic.

"There are ways to make up lost time. The two most prominent are overtime and diverting resources from one orbiter processing facility to another," Tenbusch said. "I truly believe the team will be able to respond well and make up the lost time."