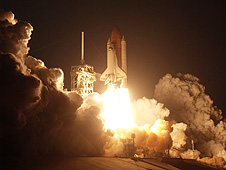 At 7:43 p.m. EDT on March 15, 2009, space shuttle Discovery lifted off into a cloudless twilight sky over NASA's Kennedy Space Center in Florida. Secured in Discovery's payload bay was the S6 truss, a final set of U.S. solar arrays and a distillation assembly to get the station’s water recycling system up to full operation.

Although technical issues delayed liftoff for more than a month, the March 15 launch countdown proceeded smoothly. After reaching orbit, the crew members removed their orange flight suits and began the first of many tasks.

The shuttle's orbiter boom sensor system was used to examine the spacecraft's thermal protection system. Data from the heat shield inspection was transmitted to Earth where technicians combed the images for any debris damage that could have occurred during launch. 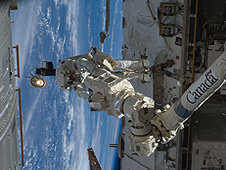 As the crew prepared the orbiter docking system for rendezvous with the station, spacesuits were inspected for the mission's three spacewalks. Archambault deftly guided the spacecraft through a "backflip" maneuver, allowing the station’s Expedition 18 Commander Michael Fincke and Flight Engineer Sandra Magnus to take photos of Discovery's heat shield.

Once docked with the station, the hatches opened between the two spacecraft. After a hearty greeting from the station crew, Wakata officially replaced Magnus as flight engineer aboard the orbital scientific complex.

Then, preparations for the first spacewalk went into high gear. Phillips and Magnus used the station's robotic Canadarm2 to grapple the 31,000-pound, 45-foot-long S6 truss segment carefully out of the shuttle's payload bay and over to the shuttle's robotic arm operated by Antonelli and Acaba.

Swanson and Arnold were first to set foot out in space to install the final segment of the station's backbone and solar arrays. Their task was completed successfully in about 6 1/2 hours.

With the unfurling of two, one acre-sized "wings," the orbiting outpost now is able to draw on 120 kilowatts of usable electricity and its capacity to perform science experiments has doubled. 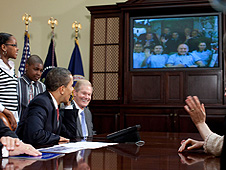 President Barack Obama is joined by members of Congress, including former astronaut Sen. Bill Nelson, and school children as he talks with astronauts on the International Space Station from the Roosevelt Room at the White House. Photo credit: White House Photo/Pete Souza
› High-res Image

After the successful deployment of the new solar arrays, Fincke and Magnus replaced a failed distillation unit on the complex's urine processor and water purification recycling system.

The newly activated system was put through its paces and 15 pounds of reclaimed drinking water was collected and returned to Earth aboard Discovery. It will be analyzed before station crew members are given the go-ahead to drink the recycled water.

The second spacewalk performed by Swanson and Acaba took about 6 1/2-hours. The space outing was dedicated to preparing a work site for new batteries that will be delivered on space shuttle Endeavour's STS-127 mission, and installation of a Global Positioning System antenna on Japan's Kibo laboratory. This was Acaba's first venture into the expanse of space.

The third and final spacewalk of the STS-119 mission had Acaba and Arnold relocating one of two crew equipment carts from one side of the mobile transporter to the other. This move provides clearance for assembly tasks on shuttle Endeavour's upcoming STS-127 mission including attachment of the Japanese Exposed Facility onto its science laboratory.

On the final day at the outpost, the shuttle and station crews gathered in the Harmony module for a long distance phone call from President Barack Obama. The president, school children and congressional members quizzed the 10 crew members about their mission and what life is like in space. Later, the crew members turned their attention to last-minute checklist items. 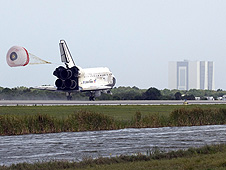 With the complex mission behind them, it was time to say farewell to the Expedition 18 crew members. After 129 days aboard the station, Magnus boarded Discovery for a ride home.

After undocking, the astronauts performed one last inspection of Discovery's thermal protection system and began their journey back to Earth.

The first landing opportunity at Kennedy was waved off because of high wind. With one more spin around the planet, the wind lessened and mission control gave Discovery the "go" for deorbit burn. The shuttle glided to a perfect landing at Kennedy's Shuttle Landing Facility at 3:14 p.m. EDT on March 28, successfully completing NASA's 13-day, STS-119 mission.

The crew members returned to Kennedy's crew quarters for a family reunion and medical checkup. The next day, the crew flew back to NASA's Johnson Space Center in Houston where they were honored with a homecoming celebration at nearby Ellington Field.