Morgan and Drew Talk To Students at Challenger Center

"Endeavour ISS, this is Houston. Are you ready for the event?"

"We are ready," said Barbara Morgan, the day's most famous teacher. 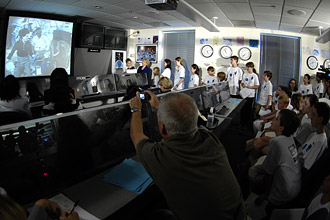 With those few but exciting words, a downlinked conversation from the International Space Station began.

What better way to engage and inspire students than to give them a chance to talk to astronauts in space? NASA is making sure that education is much more than just sitting in a classroom, reading books and taking tests.

Students and parents arrived bright and early. Some traveled from as far away as Maine, Missouri and Indiana. Maddy Lewis, a seventh-grader at Robinson Secondary School in Fairfax, Va., lives close by, but still had to travel great lengths to get to the Challenger Center. Lewis and her family were on vacation in North Carolina this week. They put their vacation on hold to drive five hours back to Alexandria so Lewis could ask Morgan her question. 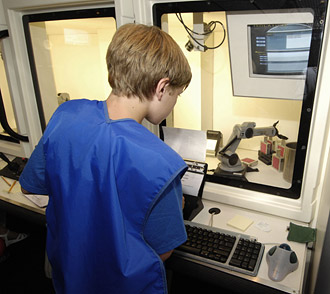 Image to left: A student at the Challenger Center for Space Science Education participates in a classroom experiment. Credit: NASA/Paul E. Alers

"It was worth the drive," said Lewis' father David.

Sarah Nakata and her parents drove 10 hours for the big event.

"It's a once in a lifetime chance," said Nakata, a 12-year-old student from Indianapolis.

Her chance came at 8:06 a.m. Thursday, Aug. 16, at the Challenger Center of Greater Washington in Alexandria, Va.

"We are absolutely thrilled to be talking with you," Morgan said to the assembled students in Virginia and countless others participating via NASA TV and the Internet. "Good morning from ISS."

Students from across the country asked all kinds of questions they posed in a national poster contest held by the Challenger Center for Space Science Education. Questions ranged from "how do you brush your teeth in space" to "can you see constellations in space" to "how will the experiments on the ISS help continue and further the mission to Mars."

Not only did Morgan and Drew answer the students' questions, they also demonstrated some of their answers. Drew put on a sleeping bag made for space to show the students how the crew sleeps in zero gravity. Morgan washed her face, demonstrating how astronauts keep clean in flight. When asked about her favorite space food, Morgan brought out some M 'n' Ms and, as the candy floated around, caught them with her mouth.

"You can see why M 'n' M's are our favorite food. They are just really fun to eat in space," Morgan said. 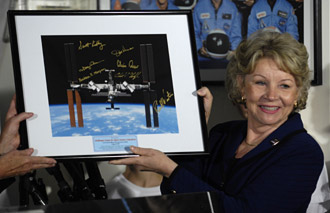 Image to left: Dr. June Scobee Rogers holds up a signed photo of the International Space Station presented to her during the downlink. Credit: NASA/Paul E. Alers

Morgan became the first educator astronaut when she joined the astronaut corps in 1998.

"She's a wonderful role model for students, for fulfilling dreams, for teachers and for the nation to say that teachers have the right stuff," said June Scobee Rodgers, founding chairman of the Challenger Center. "All her hard work in the classroom has carried over into space."

Educator astronauts are fully trained astronauts but, because of their teaching expertise, they also bring to NASA a teacher's perspective, knowledge and skills.

With the help of educators like Morgan, NASA and the Challenger Center are working to inspire the next generation of explorers through activities like this downlink.

"There is not an individual that has been to space that hasn't been influenced by a teacher," said astronaut Joe Allen. "Teachers make a difference."