STS-115: A Mission to Build On
Neither lightning bolts, nor a tropical storm, nor tricky technical challenges could ultimately keep Space Shuttle Atlantis and the STS-115 astronauts from their appointed mission: resuming construction of the International Space Station. 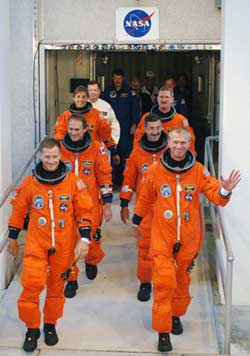 Trained and ready, Commander Brent Jett, Pilot Chris Ferguson, and Mission Specialists Heidemarie Stefanyshyn-Piper, Joe Tanner, Dan Burbank and the Canadian Space Agency's Steve MacLean arrived at the NASA Kennedy Space Center's Shuttle Landing Facility in T-38 jets to prepare for launch. Mother Nature, however, proved to be a spoiler during the crew's first trip to Florida for a liftoff scheduled for Aug. 27.

Image at Left: The astronauts head to the "Astrovan" for the trip to the launch pad after suiting up in the crew quarters. Image credit: NASA
+ View Larger Image

Technicians had already finessed a tricky antenna bolt replacement at the pad the previous week and all systems were "go" when the launch pad's lightning protection system took a direct hit during a vicious afternoon thunderstorm on Aug. 25. Launch managers called a delay so that technicians could thoroughly check all of Atlantis' systems for signs of damage.

No sooner had Atlantis been given the "all clear" on that issue when Tropical Storm Ernesto decided to veer toward Florida's Space Coast. With the storm's strength and path unpredictable, the team decided to roll the space shuttle back to the safety of the Vehicle Assembly Building, and the astronauts returned to their home base in Houston. But when Ernesto weakened, the rollback was reversed in mid-course, and Atlantis returned to the launch pad to weather the storm while protected by the rotating service structure.

With Atlantis back at the pad, the astronauts returned to Florida and the launch team pulled out all the stops in preparing the space shuttle to lift off before the window of opportunity ended. Delayed early in the countdown on Sept. 6, the crew boarded Atlantis on Sept. 8 for the first launch attempt, only to have it scrubbed for 24 hours due to a faulty sensor reading.

Pressing on again the next day, the patience and persistence of the crew and mission managers paid off at 11:15 a.m. on Sept. 9 when the familiar "...three ...two ...one... and liftoff!" rang out. Space Shuttle Atlantis roared off its seaside launch pad, piercing the vivid blue Florida sky. Cheers and tears from crowds of workers and spectators accompanied the long-awaited and successful liftoff.

Image at Right: Atlantis thunders toward space after lifting off from Launch Pad 39B. Image credit: NASA
+ View Larger Image

Checking Atlantis, Catching Up to the Station
The picture-perfect launch proved to be as perfect as it looked as, over the next few days in orbit, the astronauts examined the vehicle for any signs of damage from debris that might have struck the orbiter during ascent. Using Atlantis' robotic arm, the astronauts thoroughly inspected the orbiter's heat shield, wing leading edges, nose cap, crew cabin and other areas. All were deemed to be clear of damage.

As Atlantis chased the International Space Station, the STS-115 crew made preparations for rendezvous and docking, which took place early on flight day three. Shortly after the hatches opened, the astronauts joined Expedition 13 Commander Pavel Vinogradov, Flight Engineer Jeff Williams and European Space Agency Astronaut Thomas Reiter. Both crews wasted no time, immediately getting to work by transferring cargo to the station and preparing for the construction ahead.

No Heavy Lifting
The main purpose of the mission was to install the P3/P4 integrated truss segment with its solar arrays, which will double the existing power-generating capacity of the orbiting outpost after the next mission. The size of the truss with its expansive solar wings also considerably changed the familiar profile of the station. In its launch configuration, the segment was about 45 feet long, but once joined to the station's structure with the solar arrays deployed, the wingspan extends about 240 feet. Although the truss segment weighed 17.5 tons on Earth, handling it in the weightlessness of space was more a question of careful precision than strength. Using the maneuvering arms on both the orbiter and the space station, the astronauts performed a careful handoff of the segment after removing it from Atlantis' payload bay.

Camping Out Before Walking Under the Stars
The installation and deployment of the truss segment required three spacewalks -- the first and third conducted by Tanner and Piper, with the second handled by Burbank and MacLean. 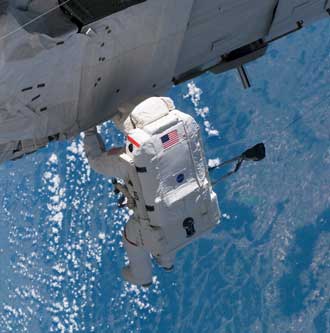 Each pair spent their pre-spacewalk sleep in a "campout" inside the International Space Station's closet-size Quest Airlock. Camping out the night before a spacewalk reduces the time the astronauts must breathe pure oxygen to avoid decompression sickness -- commonly called "the bends" -- from hours to minutes.

Construction Workers Ballet at 220 Miles Above Earth
This mission was billed as one of the most complicated space construction efforts ever conducted, and the STS-115 astronauts had trained longer than any other NASA crew. They were prepared for the challenges and any surprises they might encounter.

On flight day four during their first spacewalk, Tanner and Piper spent six hours and 26 minutes installing power and data cables between the P1 and P3/P4 structures in preparation for solar array deployment. They also released launch restraints on the solar array blanket box and performed other tasks to configure the structure for upcoming activities.

The following day, Burbank and MacLean performed a seven-hour, 11-minute spacewalk, removing launch locks and launch restraints on the solar alpha rotary joint to allow the arrays to track the sun. During the remainder of the spacewalk, the astronauts were instructed to perform "get-ahead" tasks originally scheduled for later in the mission. They prepared the P3 truss for use by the mobile transporter -- a platform that allows the station's robotic arm, Canadarm2, to move along the integrated truss structure.

After the spacewalk, engineers on the ground had to use some troubleshooting techniques to complete the checkout activities of the solar alpha rotary joint after earlier commands sent by controllers failed. 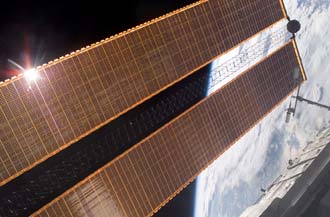 On flight day six, the crew successfully completed the full deployment of the International Space Station's new set of solar arrays, stretching them to their full 240-foot length in stages. They also moved the station's robotic arm from the Mobile Base System to the Destiny Laboratory Module.

Image at Right: The station's new solar arrays were unfurled by the crew after the truss segment was attached. Image credit: NASA
+ View Larger Image

The following day, Tanner and Piper returned to complete the spacewalk triple play by conducting a six-hour, 42-minute excursion to prepare the station's newly installed truss segment for operation and to complete other tasks devoted to the assembly and maintenance of the station. They prepared the thermal control panel for deployment and flight controllers unfurled the device, which removes heat from the station.

Packing Up, Going Home -- After One More Inspection
The astronauts got to enjoy some off-duty time and transferred cargo during their last full day at the International Space Station before undocking. This allowed the station to prepare for the arrival of the Expedition 14 crew members, Commander Michael Lopez-Alegria and Flight Engineer Mikhail Tyurin. Expedition 14 launched aboard a Russian rocket and docked at the station a few days later to begin their six-month stay on the orbiting laboratory. They joined European Space Agency astronaut Thomas Reiter of Germany, who arrived at the station aboard Discovery on the STS-121 mission in July.

The prediction of bad weather in Florida and some unidentifiable debris seen traveling in the same orbit as Atlantis gave the crew members one more day in space to conduct another inspection of the orbiter. Once the vehicle was given a clean bill of health, the astronauts prepared Atlantis for the return to Earth. 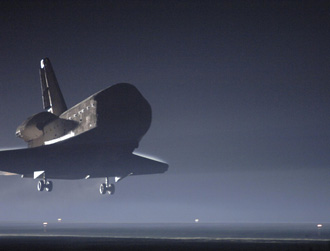 Atlantis touched down in the predawn darkness at 6:21 a.m., returning both the crew and vehicle to the place where, 12 days earlier, the journey began to restart the construction of the space station.

Image at Left: Backlit by the lights at the Shuttle Landing Facility in Florida, Atlantis touches down after a successful mission. Image credit: NASA
+ View Larger Image