In the arena of space exploration, the U.S. and Russia share a history of competition and cooperation. 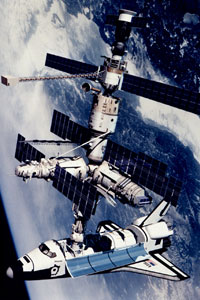 As early as 1962, U.S. President John F. Kennedy and Soviet Premier Nikita Kruschev began talks to cooperate in space. The first major effort at working together was the Apollo-Soyuz Test Project in 1975.

In 1992, the U.S. and the new Russian Federation renewed the 1987 space cooperation agreement and issued a "Joint Statement on Cooperation in Space." Subsequent additions to the agreement outline the development of the NASA-Mir program.

By the time cosmonaut Sergei Krikalev became the first Russian to fly aboard a space shuttle in February 1994, plans for U.S.-Russian cooperation in space had moved well beyond Shuttle-Mir to the International Space Station.

The Shuttle-Mir Program was filled with historic 'firsts.' Besides Krikalev's flight as the first Russian aboard a shuttle, astronaut Norman Thagard became the first American aboard the Mir Space Station, where he spent 115 days with his Russian counterparts in March-July 1995. Later that year, STS-71 became the first shuttle to dock with Mir.

Between March 1995 and May 1998, NASA and Russian scientists conducted experiments designed to answer vital questions about how humans, animals and plants function in space, how our solar system originated and developed, how we can build better technology in space and how we can build future space stations.