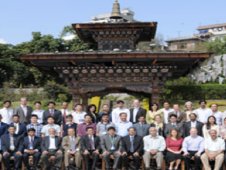 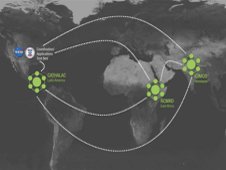 The SERVIR-Himalaya node at ICIMOD in Nepal is the third global node in SERVIR's Regional Visualization and Monitoring System. (ICIMOD) SERVIR-Himalaya made its successful debut in Kathmandu, Nepal, on Oct. 5, taking the stage as the third global node in the SERVIR Regional Visualization and Monitoring System. SERVIR-Himalaya expands the collaboration between NASA, the U.S. Agency for International Development, or USAID, and international partners to meet development challenges by "linking space to village."

Mr. Shrestha highlighted the local perspective on the Himalayan node launch: "Through the partnership with USAID and NASA on SERVIR-Himalaya, ICIMOD will be able to augment its capacity and its network of cooperative partners in the region to use Earth observation for societal benefits of the mountain communities." SERVIR features web-based access to satellite imagery, decision-support tools and interactive visualization capabilities. It puts previously inaccessible information into the hands of scientists, environmental managers and decision-makers.

Indeed, the name SERVIR comes from the Spanish verb "to serve," and SERVIR-Himalaya will serve the Hindu Kush-Himalaya region, including the partner nations of Afghanistan, Bangladesh, Bhutan, China, India, Nepal and Pakistan.

Approximately 1.3 billion people depend on the ecosystem services provided by the Himalayan mountains, yet the region is known as Earth's "third pole" because of its inaccessibility and the vast amount of water stored there in the form of ice and snow. SERVIR will integrate Earth science data from NASA satellites with geospatial information products from other government agencies to support and expand ICIMOD's focus on critical regional issues such as disaster management, biodiversity conservation, trans-boundary air pollution, snow and glacier monitoring, mountain ecosystem management and climate change adaptation.

It's no wonder that Prof. José Achache, director of the Group on Earth Observations, touted SERVIR-Himalaya as furthering the Global Earth Observing System of Systems or GEOSS. SERVIR was developed in coordination with the group, which includes more than 80 nations working together to build GEOSS to serve the needs of people the world over.

SERVIR grew out of collaboration between USAID and researchers at NASA's Marshall Space Flight Center in Huntsville, Ala.

"NASA's science mission begins here on Earth, with greater awareness and understanding of our changing planet, and solutions for protecting our environment, resources and human lives," Administrator Bolden said.

"The SERVIR technology and our partnership with various organizations and people around the globe reflect NASA's commitment to improving life on our home planet for all people," he added.

According to Mr. Yates, USAID’s perspective reflects a similar goal. "We are pleased to work with our partners in Nepal, and in other regions of the world, to build capacity to use satellite data and mapping technologies for making practical decisions that improve people’s lives," he said.

Since 2005, SERVIR has served the Mesoamerican region and the Dominican Republic from the Water Center for the Humid Tropics of Latin America and the Caribbean, which is based in Panama. SERVIR also has served East Africa since 2008, operating from the Regional Center for Mapping of Resources for Development in Nairobi, Kenya.