What is Solar Irradiance? 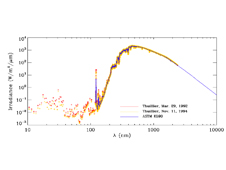 Irradiance is the amount of light energy from one thing hitting a square meter of another each second. Photons that carry this energy have wavelengths from energetic X-rays and gamma rays to visible light to the infrared and radio. It can be measured for any glowing object, including stars, the Moon, and the overly bright high beams of an oncoming car. Human beings radiate primarily infrared light; an infrared image of a human shows a very active heart and mind!

The solar irradiance is the output of light energy from the entire disk of the Sun, measured at the Earth. It is looking at the Sun as we would a star rather than as a image.

Measuring the spectral irradiance is important because different wavelengths (or colors) of sunlight are absorbed in different parts of our atmosphere. We feel warm because of the visible and infrared radiation that reaches the surface. Ultraviolet light creates the ozone layer and is then absorbed by that ozone. Higher still ultraviolet light creates the thermosphere, which is ionized by light at the short wavelengths of the extreme ultraviolet (EUV). Because radio communications are affected by the created ions, changes in the solar EUV output are a primary Space Weather concern.

Energy from other sources also enters our atmosphere. A table of some of them is shown below. Note that the energy input from Joule heating, a coupling of the ionosphere to the magnetosphere, can be about the same as from solar EUV!

Sources of Energy for the Earth's Atmosphere


We can easily see from the table that the Total Solar Irradiance (TSI) is the main contributor of energy to Earth. We are fortunate that visible and IR light, which contribute the majority of energy to Earth, exhibit the smallest relative variation. But, although TSI varies by only a fraction of a percent, it has the greatest magnitude of change (~1.2 W/m2). This may be enough to cause observable changes at Earth.

Three models of the solar spectral irradiance. All are based on measurements, but the infrared extension is a model assuming an almost black-body spectrum. Both axes are logarithmic, allowing the small irradiance at short wavelengths to be displayed with the much brighter visible light. The spectral irradiance changes by almost a million while the wavelength changes by by 1000!

At left is a spectrum from the SEE instrument on the TIMED spacecraft, modified to show the EVE wavelength sampling. Data from SEE has shown that a daily value of the EUV irradiance is not enough to model the thermosphere and ionosphere. EVE will provide the solar data needed to drive the next generation of thermosphere/ionosphere models.

Measuring the EUV irradiance can be as easy as measuring the photocurrent from a piece of metal exposed to the Sun in space. This photoelectric effect won Einstein the Nobel Prize in 1921. EVE will use gratings to disperse the spectrum onto specially prepared CCDs to measure the irradiance with an accuracy of 5%.