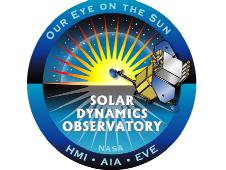 > View Larger Since launch, engineers have been conducting testing and verification of the spacecraft’s components. SDO will provide images with clarity 10 times better than high-definition television and will return more comprehensive science data faster than any other solar observing spacecraft.

Images and Multimedia in Support of the AAS Briefing

I am Dean Pesnell, the Project Scientist of SDO. We are here today to describe some of the results from our early looks at the data from SDO.

SDO became an operating mission on May 14, 2010. This means the scientists are now looking at the SDO data stream to make discoveries and understand how the Sun behaves.

SDO is the first mission in NASA’s Living With a Star Program. It will study the Sun and how the Sun affects our modern life more and more. Most of those effects come from the ever-changing magnetic field of the Sun. SDO is designed to study that magnetic field, from its’ creation to its destruction by solar flares and coronal mass ejections, and how it affects the Earth.

The Atmospheric Imaging Assembly (AIA) was built for SDO by Lockheed Martin.

AIA records extraordinary full-disk images of the Sun corona and chromosphere at a pace and with more channels than ever achieved. This will allow us to zoom in on small regions and see far more detail in time and space. AIA is designed to return high-res. versions of the entire disk, allowing us to zoom in on any part we want. By looking at entire Sun we can see how one part of the Sun affects another. You can then zoom in to measure the changes in great detail.

We are watching the butterfly effect in action on the Sun.

Karel Schrijver from Lockheed Martin, the Princpal Scientist for AIA, will tell us about the Sun’s million Kelvin corona and explain what we are seeing in the AIA data. Karel?

Today we have Karel Schrijver, Alan Title, and Neal Hurlburt to describe how small events at one point on the Sun can change the Sun at far-away points. Karel will describe why this important, Alan will show AIA data illustrates the long-range connections on the Sun, and Neal will tell us how to look for events in the AIA data.