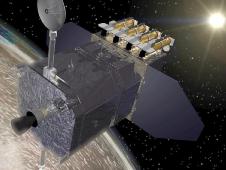 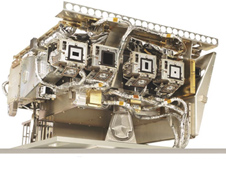 › View larger
SDO's Extreme Ultraviolet Variability Experiment (EVE). Credit: University of Colorado at Boulder Scientists have been seeing just the tip of the iceberg when monitoring flares with X-rays. With the complete extreme ultraviolet (EUV) coverage by the SDO EUV Variability Experiment (EVE), they have observed enhanced EUV radiation that appears not only during the X-ray flare but also a second time delayed by many minutes after the X-ray flare peak. Furthermore, the total EUV energy from this second EUV peak sometimes has more energy than the energy during the time of the X-ray flare peak. These delayed, second peaks are referred to as the EUV Late Phase contribution to flares.

The solar EUV radiation creates our Earth’s ionosphere (plasma in our atmosphere), so solar flares disturb our ionosphere and consequently our communication and navigation technologies, such as Global Positioning System (GPS), that transmit through the ionosphere. For over 30 years scientists have relied on the GOES X-ray monitor to tell them when to expect disturbances to our ionosphere. With these new SDO EVE results, they now recognize that additional ionospheric disturbances from these later EUV enhancements are also a concern.