Space Weather
Everyone is familiar with changes in the weather on Earth. But "weather" also occurs in space. Just as it drives weather on Earth, the sun is responsible for disturbances in our space environment.

Besides emitting a continuous stream of plasma called the solar wind, the sun periodically releases billions of tons of matter in what are called coronal mass ejections. These immense clouds of material, when directed towards Earth, can cause large magnetic storms in the space environment around Earth, the magnetosphere and the upper atmosphere.

The term space weather generally refers to conditions on the sun, in the solar wind, and within Earth's magnetosphere, ionosphere and thermosphere that can influence the performance and reliability of space-borne and ground-based technological systems and can endanger human life or health. 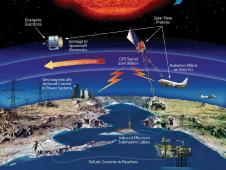 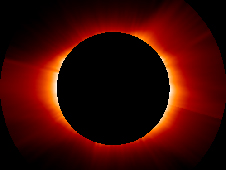 › View larger
The Sun's corona, or atmosphere, taken with a special camera that blocks out light from the Sun's main disk. Credit: ESA/NASA/SOHO Imaging the corona is a major step in space weather forecasting 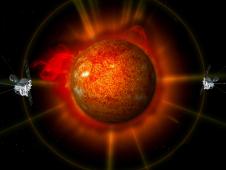 A major advance in space weather forecasting will come from our ability to determine the speed at which the phenomenon is moving. This will be achieved with stereoscopic views of the sun from NASA's Solar TErrestrial RElations Observatory (STEREO) spacecraft. This pair of spacecraft will use 3-D vision to construct a global picture of the sun and its influences.

Solar signatures are just one way to monitor space weather

Sometimes dramatic events on the sun can be the precursor of huge storms in geospace - Earth's near space environment - but at other times they can have little or no effect. Understanding how this geospace region responds to a variety of solar drivers is the key to predicting space weather.

Solving the chain - one link at a time