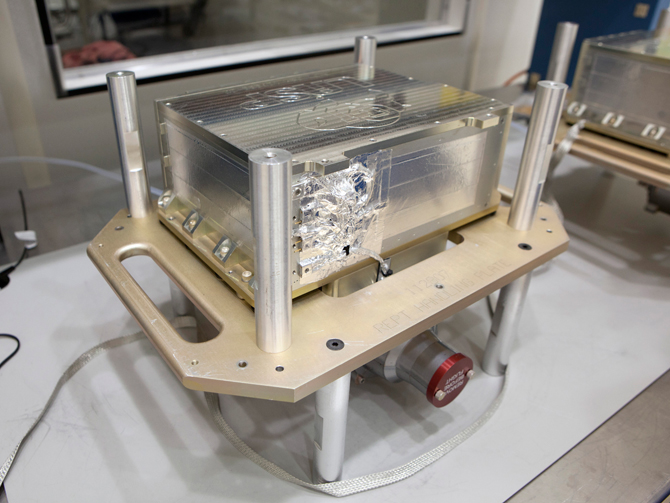 In the very early hours of Sept. 1 – just under two days since the 4:05 a.m. EDT launch of NASA’s Radiation Belt Storm Probes – the team at the RBSP Mission Operations Center (MOC) controlling spacecraft A at the Johns Hopkins Applied Physics Laboratory in Laurel, Md. was about to power up that spacecraft’s Relativistic Electron Proton Telescope (REPT-A), one of the instruments that comprise the Energetic Particle, Composition, and Thermal Plasma Suite (ECT).

The RBSP MOC team counted down: “Three, two, one….”

"Confirm, we're seeing telemetry,” was the reply from the REPT team. RBSP spacecraft B’s REPT-B was turned on roughly 12 hours later, giving ECT principal investigator Harlan Spence of the University of New Hampshire and the ECT team live data of the particles in the belts from two spacecraft, never before gathered within the radiation belts, just three days after launch. (All ECT instruments are controlled from an operations center at the Los Alamos National Laboratory.)

“We have highly understandable, full science data right out of the box,” says Spence. “The REPT units are performing identically in space as they did on the ground, exceeding our highest expectations and delivering outstanding scientific measurements of the radiation belts. We are on the exciting threshold of discovery.”

If that wasn’t impressive enough, on the same day that REPT-A was activated, the biggest solar proton event in the past two months (and a particularly quiet two months at that) occurred, giving researchers exactly the type of solar event they will use to study the behavior of the radiation belts. “There’s been no end to the extreme weather the ECT team and RBSP has attracted,” Spence says. “From the wildfires that affected the area around Los Alamos, to the hurricane that delayed the launch of RBSP, and now to the solar energetic proton storm.”

Originally, REPT wasn’t slated to be turned on just two days after launch – it was supposed to be powered up about 30 days into the mission. But that changed when Daniel Baker, REPT Science Lead at the Laboratory for Atmospheric and Space Physics (LASP) at the University of Colorado, realized the short remaining lifespan of NASA’s Solar Anomalous and Magnetospheric Particle Explorer (SAMPEX, launched in 1992 and orbiting in a polar, low Earth orbit) meant that an important window for RBSP and SAMPEX to share data about the belts, sampled from very different places, was quickly closing. (REPT measures electrons with energies from 1.5 mega electron volts, or MeV, to more than 20 MeV and protons from 17 MeV to more than 100 MeV. These energies ranges significantly overlap similar measurements being made on SAMPEX.)

“I went on a campaign to get REPT turned on much earlier to assure that as much overlap of data as possible could occur,” says Baker. “Everybody involved with RBSP, at NASA and APL and the other institutions saw the wisdom of this, and we got the turn-on time moved up.”

Baker describes the science findings coming down from REPT as “beautiful data,” and the solar energetic proton storm was a much-appreciated bonus. “The sun seemed to know what we were up to,” Baker says. “It gave us just the stimulus we were looking for. It couldn’t have been scripted any better.” 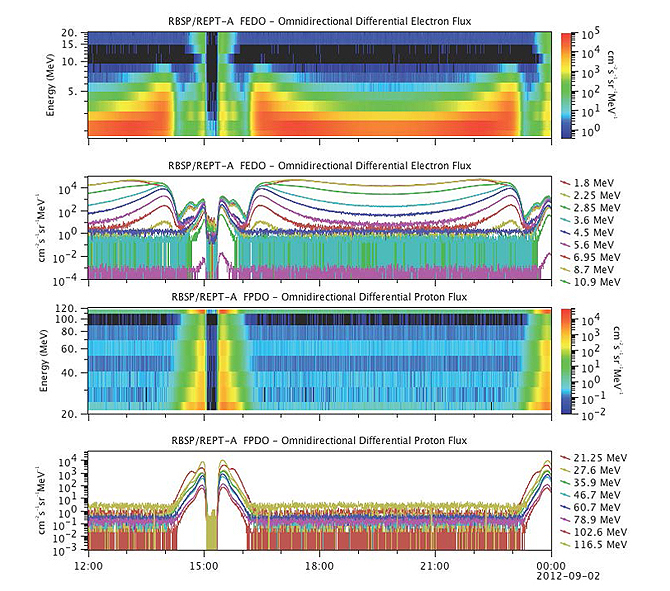 “These are the fabulous results we’ve been waiting 20 years for,” says Baker, “since SAMPEX and CRRES [Combined Release and Radiation Effects Satellite, launched 1990] were launched. Now we can compare what we’re seeing to the empirical models we’ve been using for decades, and learn how the real observations compare with those models.”

ECT’s other instruments will be turned on in the coming weeks; the Magnetic Electron Ion Spectrometer (MagEIS) instruments (eight in total, four per spacecraft) were powered up on Thursday, Sept. 6, while the Helium Oxygen Proton Electron (HOPE) instrument will be the last RBSP instrument to be powered up, sometime in mid- to late October.

Launched on Aug. 30, 2012, RBSP is part of NASA's Living With a Star Program to explore aspects of the connected sun-Earth system that directly affect life and society. LWS is managed by the agency's Goddard Space Flight Center in Greenbelt, Md. APL built the RBSP spacecraft and will manage the mission for NASA.