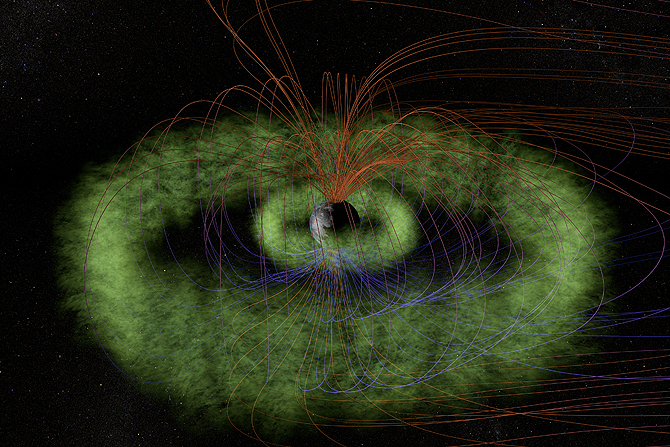 Our day-to-day lives exist in what physicists would call an electrically neutral environment. Desks, books, chairs and bodies don't generally carry electricity and they don't stick to magnets. But life on Earth is substantially different from, well, almost everywhere else. Beyond Earth's protective atmosphere and extending all the way through interplanetary space, electrified particles dominate the scene. Indeed, 99% of the universe is made of this electrified gas, known as plasma.

Two giant donuts of this plasma surround Earth, trapped within a region known as the Van Allen Radiation Belts. The belts lie close to Earth, sandwiched between satellites in geostationary orbit above and satellites in low Earth orbit (LEO) are generally below the belts. A new NASA mission called the Radiation Belt Storm Probes (RBSP), due to launch in August 2012, will improve our understanding of what makes plasma move in and out of these electrified belts wrapped around our planet.

"We discovered the radiation belts in observations from the very first spacecraft, Explorer 1, in 1958" says David Sibeck, a space scientist at NASA's Goddard Space Flight Center in Greenbelt, Md., and the mission scientist for RBSP. "Characterizing these belts filled with dangerous particles was a great success of the early space age, but those observations led to as many questions as answers. These are fascinating science questions, but also practical questions, since we need to protect satellites from the radiation in the belts."

The inner radiation belt stays largely stable, but the number of particles in the outer one can swell 100 times or more, easily encompassing a horde of communications satellites and research instruments orbiting Earth. Figuring out what drives these changes in the belts, requires understanding what drives the plasma.


Plasmas seethe with complex movement. They generally flow along a skeletal structure made of invisible magnetic field lines, while simultaneously creating more magnetic fields as they move. Teasing out the rules that govern such a foreign environment – one that can only be studied from afar – lies at the heart of understanding a range of events that make up space weather, from giant explosions on the sun to potentially damaging high energy particles in near-Earth environs.

To distinguish between a host of theories developed over the years on plasma movement in those near-Earth environs, RBSP scientists have designed a suite of instruments to answer three broad questions. Where do the extra energy and particles come from? Where do they disappear to, and what sends them on their way? How do these changes affect the rest of Earth's magnetic environment, the magnetosphere? In addition to its broad range of instruments, the RBSP mission will make use of two spacecraft in order to better map out the full spatial dimensions of a particular event and how it changes over time.

Scientists want to understand not only the origins of electrified particles – possibly from the solar wind constantly streaming off the sun; possibly from an area of Earth's own outer atmosphere, the ionosphere – but also what mechanisms gives the particles their extreme speed and energy.

"We know examples where a storm of incoming particles from the sun can cause the two belts to swell so much that they merge and appear to form a single belt," says Shri Kanekal, RBSP's deputy project scientist at Goddard. "Then there are other examples where a large storm from the sun didn't affect the belts at all, and even cases where the belts shrank. Since the effects can be so different, there is a joke within the community that 'If you've seen one storm . . . You've seen one storm.' We need to figure out what causes the differences."

There are two broad theories on how the particles get energy: from radial transport or in situ. In radial transport, particles move perpendicular to the magnetic fields within the belts from areas of low magnetic strength far from Earth to areas of high magnetic strength nearer Earth. The laws of physics dictate that particle energies correlate to the strength of the magnetic field, increasing as they move towards Earth. The in situ theory posits that electromagnetic waves buffet the particles -- much like regular pushes on a swing -- successively raising their speed (and energy).

As for how the particles leave the belts, scientists again agree on two broad possibilities: particles go up, or they go down. Perhaps they travel down magnetic field lines toward Earth, out of the belts into the ionosphere, where they stay part of Earth's magnetic system with the potential to return to the belts at some point. Or they are transported up and out, on a one-way trip to leave the magnetosphere forever and enter interplanetary space. 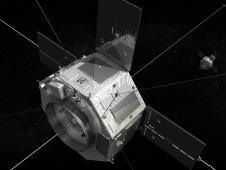 › View larger
An artist's rendition of what the two Radiation Belt Storm Probe spacecraft will look like in space. Credit: NASA/Goddard Space Flight Center "In reality, the final answers may well be a combination of the basic possibilities," says Sibeck. "There may be, and probably are, multiple processes at multiple scales at multiple locations. So RBSP will perform very broad measurements and observe numerous attributes of waves and particles to see how each event influences others."

To distinguish between the wide array of potential theories – not to mention combinations thereof – the instruments on RBSP will be equipped to measure a wide spectrum of information. RBSP will measure a host of different particles, including hydrogen, helium and oxygen, as well as measure magnetic fields and electric fields throughout the belts, both of which can guide the movement of these particles.

RBSP will also measure a wide range of energies from the coldest particles in the ionosphere to the most energetic, most dangerous particles. Information about how the radiation belts swell and shrink will help improve models of Earth's magnetosphere as a whole.

"Particles from the radiation belts can penetrate into spacecraft and disrupt electronics, short circuits or upset memory on computers," says Sibeck. "The particles are also dangerous to astronauts traveling through the region. We need models to help predict hazardous events in the belts and right now we are aren’t very good at that. RBSP will help solve that problem."

While the most immediate practical need for studying the radiation belts is to understand the space weather system near Earth and to protect humans and precious electronics in space from geomagnetic storms, there is another reason scientists are interested in this area. It is the closest place to study the material, plasma, that pervades the entire universe. Understanding this environment so foreign to our own is crucial to understanding the make up of every star and galaxy in outer space.

The Johns Hopkins University Applied Physics Laboratory (APL) built and will operate the twin RBSP spacecraft for NASA’s Living With a Star program, which is managed by Goddard Space Flight Center for NASA’s Science Mission Directorate.