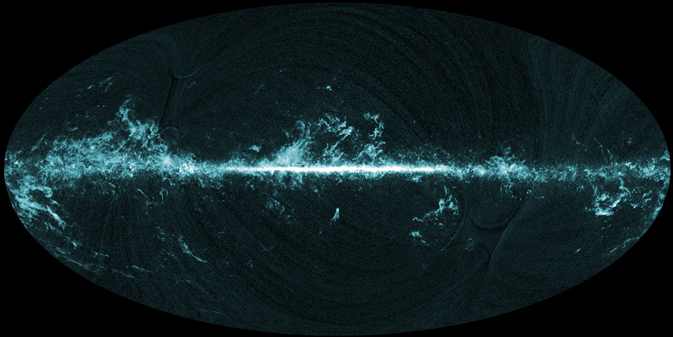 This all-sky image shows the distribution of carbon monoxide (CO), a molecule used by astronomers to trace molecular clouds across the sky, as seen by Planck. Image credit: ESA/Planck Collaboration › Full image and caption 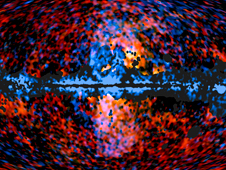 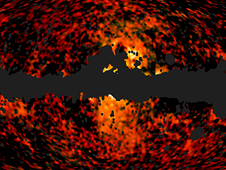 This all-sky image shows the spatial distribution over the whole sky of the galactic haze at 30 and 44 GHz, extracted from the Planck observations. Image credit: ESA/Planck Collaboration
› Full image and caption

New images from the Planck mission show previously undiscovered islands of star formation and a mysterious haze of microwave emissions in our Milky Way galaxy. The views give scientists new treasures to mine and take them closer to understanding the secrets of our galaxy.

"The images reveal two exciting aspects of the galaxy in which we live," said Planck scientist Krzysztof M. Gorski from NASA's Jet Propulsion Laboratory in Pasadena, Calif., and Warsaw University Observatory in Poland. "They show a haze around the center of the galaxy, and cold gas where we never saw it before."

The new images show the entire sky, dominated by the murky band of our Milky Way galaxy. One of them shows the unexplained haze of microwave light previously hinted at in measurements by NASA's Wilkinson Microwave Anisotropy Probe (WMAP).

"The haze comes from the region surrounding the center of our galaxy and looks like a form of light energy produced when electrons accelerate through magnetic fields," said Davide Pietrobon, another JPL Planck scientist.

"We're puzzled though, because this haze is brighter at shorter wavelengths than similar light emitted elsewhere in the galaxy," added Gorski.

Several explanations have been proposed for this unusual behaviour.

"Theories include higher numbers of supernovae, galactic winds and even the annihilation of dark-matter particles," said Greg Dobler, a Planck collaborator from the University of California in Santa Barbara, Calif. Dark matter makes up about a quarter of our universe, but scientists don't know exactly what it is.

The second all-sky image is the first map to show carbon monoxide over the whole sky. Cold clouds with forming stars are predominantly made of hydrogen molecules, difficult to detect because they do not readily emit radiation. Carbon monoxide forms under similar conditions, and though it is rarer, the gas emits more light. Astronomers can use carbon monoxide to identify the clouds of hydrogen where stars are born.

Surveys of carbon monoxide undertaken with radio telescopes on the ground are time-consuming, so they are limited to portions of the sky where clouds of molecules are already known or expected to exist. Planck scans the whole sky, allowing astronomers to detect the gas where they weren't expecting to find it.

Planck's primary goal is to observe the Cosmic Microwave Background, the relic radiation from the Big Bang, and to extract its encoded information about what our universe is made of, and the origin of its structure.

This relic radiation can only be reached once all sources of foreground emission, such as the galactic haze and the carbon monoxide signals, have been identified and removed.

"The lengthy and delicate task of foreground removal provides us with prime datasets that are shedding new light on hot topics in galactic and extragalactic astronomy alike," said Jan Tauber, Planck project scientist at the European Space Agency.

Planck's first findings on the Big Bang's relic radiation are expected to be released in 2013. The new results are being presented this week at an international astronomy conference in Bologna, Italy.

NASA's Planck Project Office is based at NASA's Jet Propulsion Laboratory, Pasadena, Calif. JPL contributed mission-enabling technology for both of Planck's science instruments. European, Canadian and U.S. Planck scientists will work together to analyze the Planck data. More information is online at http://www.nasa.gov/planck and http://www.esa.int/planck .