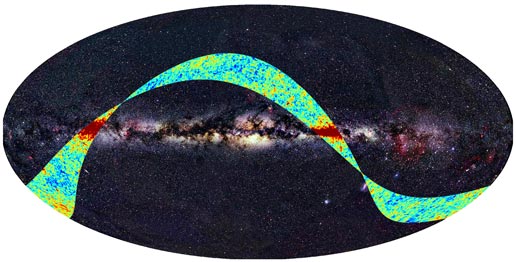 One of Planck's first images is shown as a strip superimposed over a two-dimensional projection of the whole sky as seen in visible light. The strip covers 360-degrees of sky and, at its widest, is about 15 degrees across. The prominent horizontal band is light from our Milky Way galaxy.

The Planck image shows how the sky looks at millimeter-long wavelengths. Red areas are brighter, blue areas are darker. The large red strips show the Milky Way. The small bright and dark spots far from the galactic plane are from the cosmic microwave background -- relic radiation leftover from the birth of our universe.

Planck is measuring the sky at nine wavelengths of light, one of which is shown here.

Larger view
› Back To Top