The Pioneer Venus Project's main objective was to investigate the solar wind in the Venusian environment, map the planet's surface through a radar imaging system and study the characteristics of the upper atmosphere and ionosphere. 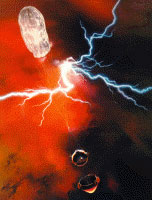 Image right: An artist's rendition of an atmospheric probe descending through the clouds of Venus. Image credit: NASA.

Pioneer Venus consisted of two spacecraft: the Orbiter and the Multiprobe. The Orbiter carried an assortment of instruments for investigating plasma in upper Venusian atmosphere, observing reflected sunlight from the cloud layers at a variety of wavelengths, in addition to a surface radar mapper, and was launched on the May 20, 1978. It reached orbit around Venus on Dec. 4, 1978. Although originally intended to operate for one Venusian year, most of the Orbiter's instruments were still operating when the spacecraft entered the atmosphere on Oct. 8, 1992.

The Pioneer Venus Multiprobe, which was launched on Aug. 8, 1978 and reached Venus on Dec. 9, 1978, was made of 5 separate probes: the probe transporter (referred to as the Bus), a large atmospheric entry probe (called Sounder), and three small probes. The Sounder released from the Bus on Nov. 15, 1978. The three smaller probes released on Nov. 19, 1978. The probes sent data to Earth as they descended toward the surface.