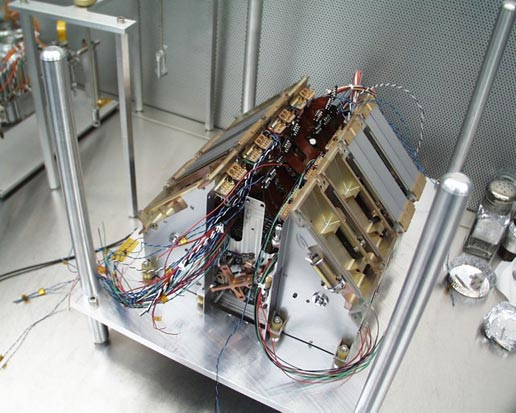 TEGA is a combination high-temperature furnace and mass spectrometer instrument that scientists will use to analyze martian ice and soil samples. The robotic arm will deliver samples to a hopper designed to feed a small amount of soil and ice into eight tiny ovens about the size of an ink cartridge in a ballpoint pen. Each of these ovens will be used only once to analyze eight unique ice and soil samples.

Once a sample is successfully received and sealed in an oven, the temperature is slowly increased at a constant rate, and the power required for heating is carefully and continuously monitored. This process, called scanning calorimetry, shows the transitions from solid to liquid to gas of the different materials in the sample: important information needed by scientists to understand the chemical character of the soil and ice.

As the temperature of the furnace increases up to 1000°C (1800°F), the ice and other volatile materials in the sample are vaporized into a stream of gases. These are called evolved gases and are transported via an inert carrier to a mass spectrometer, a device used to measure the mass and concentrations of specific molecules and atoms in a sample. The mass spectrometer is sensitive to detection levels down to 10 parts per billion, a level that may detect minute quantities of organic molecules potentially existing in the ice and soil.

With these precise measurement capabilities, scientists will be able to determine ratios of various isotopes of hydrogen, oxygen, carbon, and nitrogen, providing clues to origin of the volatile molecules, and possibly, biological processes that occurred in the past.

The TEGA is being built by a team at the University of Arizona, led by Dr. William Boynton and at the University of Texas, Dallas by Dr. John Hoffman. This team has developed several instruments for space flight, including a Differential Scanning Calorimeter (DSC) and Evolved Gas Analyzer (EGA) that flew on the ill-fated Mars Polar Lander, and the Gamma-Ray Spectrometer that is currently flying on the Mars Odyssey Orbiter. The latter instrument is returning data on the elemental composition of Mars and has provided evidence for high concentrations of subsurface ice in the martian arctic.