Microscopy, Electrochemistry, and Conductivity Analyzer
built by the Jet Propulsion Laboratory
The Microscopy, Electrochemistry, and Conductivity Analyzer (MECA) characterizes the soil of Mars much like a gardener would test the soil in his or her yard. By dissolving small amounts of soil in water, MECA determines the pH, the abundance of minerals such as magnesium and sodium cations or chloride, bromide and sulfate anions, as well as dissolved oxygen and carbon dioxide. Looking through a microscope, MECA examines the soil grains to help determine their origin and mineralogy. Needles stuck into the soil determine the water and ice content, and the ability of both heat and water vapor to penetrate the soil.

MECA's wet chemistry lab contains four single-use beakers, each of which can accept one sample of martian soil. Phoenix's Robotic Arm will initiate each experiment by delivering a small soil sample to one beaker, which is ready and waiting with a pre-warmed and calibrated soaking solution. Alternating soaking, stirring, and measuring, the experiment continues for the entire day. It concludes with the addition of two chemical pellets. The first contains an acid to tease out carbonates and other constituents that are only soluble in acidic solutions. The second contains specific reagents to test for sulfates and soil oxidants. 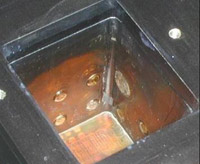 Image right: A prototype wet chemistry beaker showing some of the electrochemistry sensors on the sides of the beaker. Image credit: NASA/JPL.
+ Larger view

The optical and atomic-force microscopes complement MECA's wet chemistry experiments. With images from these microscopes, scientists will examine the fine detail structure of soil and water ice samples. Detection of hydrous and clay minerals by these microscopes may indicate past liquid water in the martian arctic. The optical microscope will have a resolution of 4 microns per pixel, allowing detection of particles ranging from about 10 micrometers up to the size of the field of view (about 1 millimeter by 2 millimeters). Red, green, blue, and ultraviolet LEDs will illuminate samples in differing color combinations to enhance the soil and water-ice structure and texture at these scales. The atomic force microscope will provide sample images down to 10 nanometers - the smallest scale ever examined on Mars. Using its sensors, the AFM creates a very small-scale "topographic" map showing the detailed structure of soil and ice grains.

MECA's final instrument, the thermal and electrical conductivity probe, will be attached at the "knuckle" of the RA. The probe will probably consist of three small spikes that will be inserted into the ends of an excavated trench. In addition to measuring temperature, the probe will measure thermal properties of the soil that affect how heat is transferred, providing scientists with better understanding of surface and atmospheric interactions. Using the same spikes, the electrical conductivity will be measured to indicate any transient wetness that might result from the excavation. Most likely, the thermal measurement will reflect ice content and the electrical, unfrozen water content.
› Back To Top