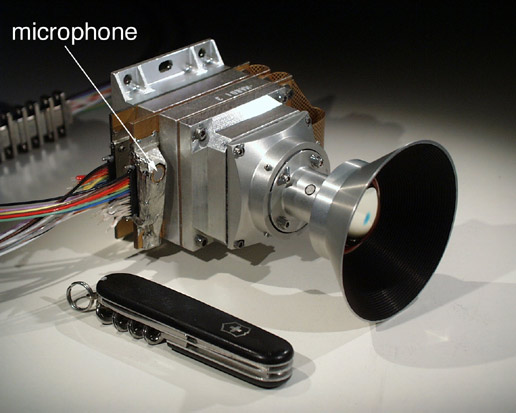 + High resolution
Image top: Delivered for the Mars Surveyor 2001 Lander, MARDI was designed to produce images of the geology around the landing site. Image Credit: NASA/JPL/MLSS.


MARDI was included among the collection of science instruments on Phoenix to provide information about the geographic context of landforms around the landing zone. However, pre-launch testing of the spacecraft identified a potential problem in handling data from the camera during the crucial moments of final descent. This led to a decision not to use the camera.

MARDI was designed and built to acquire a series of wide-angle, color images of the landing site during the final three minutes of the descent to the surface of Mars. These images would have supplemented images taken from orbit to help scientists understand whether the landing site is representative of the rest of Mars' northern plains. The camera incorporates an innovative electronics design to enable high-quality scientific data acquisition in a very compact package. It weighs about one pound, less than any previous camera sent to Mars, and is also extremely conservative of power, using only three watts during data acquisition. It has a refractive optics system that collects and bends light to enable a 66-degree-wide field of view. The instrument uses a charged-coupled device that produces high density, 1024 x 1024 pixel images, each with an exposure time of 4 milliseconds. The instrument also includes a small microphone that, like the camera, will not be used.

A potential problem with the spacecraft's data handling, not with the camera itself, led to the decision not to use the instrument. Tests of the assembled lander found that an interface card would have a small possibility of triggering loss of some vital engineering data if it were to receive imaging data during a critical phase of final descent. That possibility, though small, was judged to be an unacceptable risk, and the potential problem with the interface card was identified too late for changing hardware. The card has circuitry that routes data from various parts of the payload. An alternative plan, to take just one image with the descent camera and store it in the camera, was assessed. However, that would have required changes to timing of events during the spacecraft's descent, so that alternative was also rejected as still posing unacceptable risk.

MARDI was built by a team at Malin Space Science Systems led by Mike Malin. This team was responsible for designing the MARDI for the Mars Polar Lander and the Mars Surveyor 2001 Lander missions. When the 2001 lander mission was cancelled, MARDI was put into bonded storage at NASA's Jet Propulsion Laboratory until it gained a new berth in the payload of the Phoenix mission.