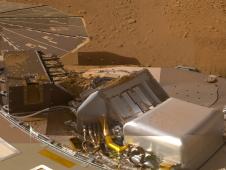 
PASADENA, Calif. -- Data from NASA's Phoenix Mars Lander suggest liquid water has interacted with the Martian surface throughout the planet's history and into modern times. The research also provides new evidence that volcanic activity has persisted on the Red Planet into geologically recent times, several million years ago.

Although the lander, which arrived on Mars on May 25, 2008, is no longer operating, NASA scientists continue to analyze data gathered from that mission. These recent findings are based on data about the planet's carbon dioxide, which makes up about 95 percent of the Martian atmosphere.

"Atmospheric carbon dioxide is like a chemical spy," said Paul Niles, a space scientist at NASA's Johnson Space Center in Houston. "It infiltrates every part of the surface of Mars and can indicate the presence of water and its history."

Phoenix precisely measured isotopes of carbon and oxygen in the carbon dioxide of the Martian atmosphere. Isotopes are variants of the same element with different atomic weights. Niles is lead author of a paper about the findings published in Thursday's online edition of the journal Science. The paper explains the ratios of stable isotopes and their implications for the history of Martian water and volcanoes.

"Isotopes can be used as a chemical signature that can tell us where something came from, and what kinds of events it has experienced," Niles said.

This chemical signature suggests that liquid water primarily existed at temperatures near freezing and that hydrothermal systems similar to Yellowstone's hot springs have been rare throughout the planet's past. Measurements concerning carbon dioxide showed Mars is a much more active planet than previously thought. The results imply Mars has replenished its atmospheric carbon dioxide relatively recently, and the carbon dioxide has reacted with liquid water present on the surface.

Measurements were performed by an instrument on Phoenix called the Evolved Gas Analyzer. The instrument was capable of doing more accurate analysis of carbon dioxide than similar instruments on NASA's Viking landers in the 1970s. The Viking Program provided the only previous Mars isotope data sent back to Earth.

The low gravity and lack of a magnetic field on Mars mean that as carbon dioxide accumulates in the atmosphere, it will be lost to space. This process favors loss of a lighter isotope named carbon-12 compared to carbon-13. If Martian carbon dioxide had experienced only this process of atmospheric loss without some additional process replenishing carbon-12, the ratio of carbon-13 to carbon-12 would be much higher than what Phoenix measured. This suggests the Martian atmosphere recently has been replenished with carbon dioxide emitted from volcanoes, and volcanism has been an active process in Mars' recent past. However, a volcanic signature is not present in the proportions of two other isotopes, oxygen-18 and oxygen-16, found in Martian carbon dioxide. The finding suggests the carbon dioxide has reacted with liquid water, which enriched the oxygen in carbon dioxide with the heavier oxygen-18.

Niles and his team theorize this oxygen isotopic signature indicates liquid water has been present on the Martian surface recently enough and abundantly enough to affect the composition of the current atmosphere. The findings do not reveal specific locations or dates of liquid water and volcanic vents, but recent occurrences of those conditions provide the best explanations for the isotope proportions.

For more information about the Phoenix mission, visit http://www.nasa.gov/phoenix .