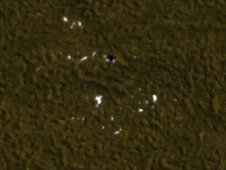 PASADENA, Calif. -- NASA's Mars Odyssey began a second campaign Monday to check on whether the Phoenix Mars Lander has revived itself after the northern Martian winter. The orbiter received no signal from the lander during the first 10 overflights of this campaign.

Odyssey will listen for Phoenix during 50 additional overflights, through Feb. 26, during the current campaign.

Phoenix landed on Mars on May 25, 2008, and operated successfully in the Martian arctic for about two months longer than its planned three-month mission. Operations ended when waning sunlight left the solar-powered craft with insufficient energy to keep working. The season at the Phoenix landing site is now mid-springtime, with the sun above the horizon for roughly 22 hours each Martian day. That is comparable to the illumination that Phoenix experienced a few weeks after completing its three-month primary mission.

Phoenix was not designed to withstand the extremely low temperatures and the ice load of the Martian arctic winter. In the extremely unlikely event that the lander has survived the winter and has achieved a stable energy state, it would operate in a mode where it periodically awakens and transmits a signal to any orbiter in view.

A third campaign to check on whether Phoenix has revived itself is scheduled for April 5-9, when the sun will be continuously above the Martian horizon at the Phoenix site.

Mars Odyssey is managed for NASA's Science Mission Directorate by the Jet Propulsion Laboratory, a division of the California Institute of Technology in Pasadena. Lockheed Martin Space Systems, Denver, is the prime contractor for the project and made the spacecraft. The successful Phoenix mission was led by Peter Smith of the University of Arizona, Tucson, with project management at JPL and development partnership at Lockheed Martin. International contributions came from the Canadian Space Agency; the University of Neuchatel, Switzerland; the universities of Copenhagen and Aarhus in Denmark; the Max Planck Institute in Germany; the Finnish Meteorological Institute; and Imperial College, London.