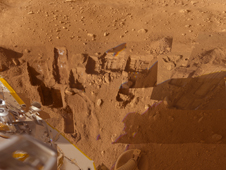 This mosaic of images from the Surface Stereo Imager camera on NASA's Phoenix Mars Lander shows several trenches dug by Phoenix, plus a corner of the spacecraft's deck and the Martian arctic plain stretching to the horizon. Image Credit: NASA/JPL-Caltech/University of Arizona/Texas A&M University
Full image and caption 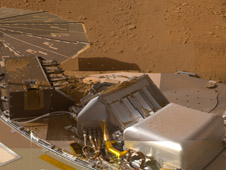 This mosaic of images from the Surface Stereo Imager camera on NASA's Phoenix Mars Lander shows a portion of the spacecraft's deck after deliveries of several Martian soil samples to instruments on the deck. Image Credit: NASA/JPL-Caltech/University of Arizona/Texas A&M University
Full image and caption 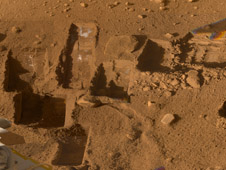 Interpretations of data that Phoenix returned during its five months of operation on a Martian arctic plain fill four papers in this week's edition of the journal Science, the first major peer-reviewed reports on the mission's findings. Phoenix ended communications in November 2008 as the approach of Martian winter depleted energy from the lander's solar panels.

"Not only did we find water ice, as expected, but the soil chemistry and minerals we observed lead us to believe this site had a wetter and warmer climate in the recent past -- the last few million years -- and could again in the future," said Phoenix Principal Investigator Peter Smith of the University of Arizona, Tucson.

A paper about Phoenix water studies, for which Smith is the lead author with 36 coauthors from six nations, cites clues supporting an interpretation that the soil has had films of liquid water in the recent past. The evidence for water and potential nutrients "implies that this region could have previously met the criteria for habitability" during portions of continuing climate cycles, these authors conclude.

The mission's biggest surprise was finding a multi-talented chemical named perchlorate in the Martian soil. This Phoenix finding caps a growing emphasis on the planet's chemistry, said Michael Hecht of NASA's Jet Propulsion Laboratory, Pasadena, Calif., who has 10 coauthors on a paper about Phoenix's soluble-chemistry findings.

"The study of Mars is in transition from a follow-the-water stage to a follow-the-chemistry stage," Hecht said. "With perchlorate, for example, we see links to atmospheric humidity, soil moisture, a possible energy source for microbes, even a possible resource for humans."

Perchlorate, which strongly attracts water, makes up a few tenths of a percent of the composition in all three soil samples analyzed by Phoenix's wet chemistry laboratory. It could pull humidity from the Martian air. At higher concentrations, it might combine with water as a brine that stays liquid at Martian surface temperatures. Some microbes on Earth use perchlorate as food. Human explorers might find it useful as rocket fuel or for generating oxygen.

Another surprise from Phoenix was finding ice clouds and precipitation more Earth-like than anticipated. The lander's Canadian laser instrument for studying the atmosphere detected snow falling from clouds. In one of this week's reports, Jim Whiteway of York University, Toronto, and 22 coauthors say that, further into winter than Phoenix operated, this precipitation would result in a seasonal buildup of water ice on and in the ground.

"Before Phoenix we did not know whether precipitation occurs on Mars," Whiteway said. "We knew that the polar ice cap advances as far south as the Phoenix site in winter, but we did not know how the water vapor moved from the atmosphere to ice on the ground. Now we know that it does snow, and that this is part of the hydrological cycle on Mars."

Evidence that water ice in the area sometimes thaws enough to moisten the soil comes from finding calcium carbonate in soil heated in the lander's analytic ovens or mixed with acid in the wet chemistry laboratory. The University of Arizona's William Boynton and 13 coauthors report that the amount of calcium carbonate "is most consistent with formation in the past by the interaction of atmospheric carbon dioxide with liquid films of water on particle surfaces."

The heating in ovens did not drive off any water vapor at temperatures lower than 295 degrees Celsius (563 degrees Fahrenheit), indicating the soil held no water adhering to soil particles. Climate cycles resulting from changes in the tilt and orbit of Mars on scales of hundreds of thousands of years or more could explain why effects of moist soil are present.

The Phoenix mission was led by Smith at the University of Arizona with project management at JPL and development partnership at Lockheed Martin, Denver. Information and images from the mission are available online at http://phoenix.lpl.arizona.edu and http://www.nasa.gov/phoenix . Media contacts: Guy Webster 818-354-6278
Jet Propulsion Laboratory, Pasadena, Calif.
guy.webster@jpl.nasa.gov