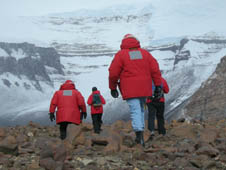 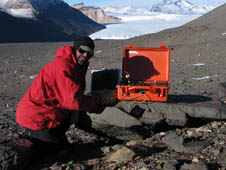 Expedition member Doug Ming of NASA's Johnson Space Center, Houston, uses a field version of an X-ray diffraction and fluorescence instrument called CheMin, part of the science payload for NASA's Mars Science Laboratory mission slated for launch in 2011. Image credit: NASA
› Larger view About half a year before the robotic arm on NASA's Phoenix Mars Lander began digging into soil and subsurface ice of an arctic plain of Mars, six scientists traveled to one of the coldest, driest places on Earth for soil-and-ice studies that would end up aiding analysis of the Mars data.

They used duplicates of some of the Phoenix spacecraft's instruments, plus other methods, in the Antarctic Dry Valleys where breaks in the south polar ice sheet leave windswept rocky terrain exposed. Their two-week expedition, overlapping New Year's Day 2008, was part of the International Polar Year, a multipronged scientific program focused on the Arctic and Antarctic from March 2007 to March 2009.

"We wanted to gain experience with our Phoenix instruments in one of the most Mars-like environments on Earth," said Leslie Tamppari of NASA's Jet Propulsion Laboratory, Pasadena, Calif. She is the project scientist for Phoenix and principal investigator for the Antarctic Dry Valleys expedition, though pregnancy kept her from making the trip to Antarctica.

Like the Martian plain where Phoenix landed, the Antarctic Dry Valleys have permafrost and experience cycles of expansion and contraction that have formed the terrain into a pattern of polygons slightly higher at the centers than at the edges. Some of the valleys visited by the expedition, such as University Valley, even have Mars-like "dry" permafrost, where the soil above the ice table never warms above freezing. This makes it even more Mars-like than "wet" permafrost in Earth's Arctic and in lower-elevation dry valleys in Antarctica, where ice in the upper layer of soil thaws in the summer.

"Those upper valleys are the best analog for the Phoenix site," said Peter Smith of the University of Arizona, Tucson, principal investigator for the Phoenix mission. "The soil temperatures are always well below freezing, ice is stable about 15 inches below the surface, and the extreme conditions challenge life forms to the maximum. This is as close as we can get to Martian conditions."

Sam Kounaves of Tufts University, Medford, Mass., took a working copy of the Phoenix lander's wet chemistry laboratory experiment. He collected soil samples from different depths and used that instrument to assess the concentrations of many soluble nutrients, such as calcium, magnesium and potassium. He also used other methods back at his lab to check for the same ingredients and found essentially the same concentrations. "This helps us validate the results from the wet chemistry laboratory, and gives us more confidence in the data we obtained from Mars," Kounaves said.

The wet chemistry laboratory was one of the tools Phoenix carried for investigating whether the permafrost environment on Mars has ever offered a favorable chemical environment for microbial life. It found several soluble soil nutrients in concentrations comparable to fertile soils on Earth. That's one plus for habitability. Other key factors in evaluating the site's habitability include whether the water-ice ever thaws enough to become biologically available, whether the site has a supply of carbon-based chemicals that are building blocks for life, and whether the site has an energy source organisms could use.

Results from the Antarctic expedition are helping the Phoenix team interpret results from some of the spacecraft's tools assessing those other factors, too.

Doug Ming of NASA Johnson Space Center, Houston, brought back to Houston soil samples from different depths of about a dozen trenches dug in Antarctic Dry Valleys. Some of the samples will be analyzed in an engineering model of the Mars lander's oven instrument that heats samples and identifies the volatile gases driven off by the heating. This instrument on Phoenix served to study the minerals in the soil and check for carbon-containing organic compounds.

"We've kept the samples frozen and sterile since they were collected," Ming said. The analysis continues.

Phoenix used a fork-like probe, inserted into Martian soil, to study changes in the soil's humidity, electrical and thermal properties. Aaron Zent, of NASA Ames Research Center, Moffett Field, Calif., brought one of these thermal and electroconductivity probes to the Antarctic Dry Valleys.

"You have to use the probe in undisturbed soil, not a soil sample that you've dug up," Zent said. "We got some measurements that demonstrated the functionality of the instrument."

The instrument, which was operating at temperatures some 20 Celsius degrees (36 Fahrenheit degrees) warmer than the highest temperatures Phoenix experienced on Mars, also found changes in soil electrical properties that reflected small changes in soil water over the course of the Antarctic day.

Zent is using weather records from the dry valleys, similar to the temperature and humidity data from the conductivity probe, to refine models of the Antarctic and Martian climates and the presence of thin films of unfrozen water in the soil.

Soil adjacent to the ice table in the dry permafrost of University Valley does not get warmer than about minus 10 degrees Celsius (14 degrees Fahrenheit). That is a warmer temperature than the soil at the Phoenix landing site reaches currently, but would be a closer match to conditions at the Phoenix site a few millions years ago, when the rotation axis of Mars had a greater tilt and the poles got warmer. At such orbital configurations, conditions in the Martian high arctic might closely parallel conditions in Earth's Antarctica.

The expedition included two biologists -- Chris McKay of NASA Ames Research Center, and Susanne Douglas of JPL. Among other studies in the Antarctic Valleys, the team checked whether any microbes live close to the ice in the dry permafrost of University Valley, which had never been done before. The results of these studies, still in review, could add new understanding of the Earth's own extreme environments. If living microbes are found in the dry permafrost, this would bring us one step closer to understanding the potential habitability on Mars.

"There's no other place on Earth that combines the dryness and the coldness of the Antarctic Dry Valleys, a combination that presents a difficult challenge to life," Douglas said.