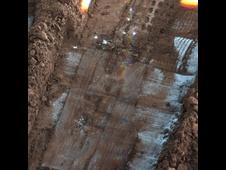 
Image archive
Animations and videos
PASADENA, Calif. -- The Martian arctic soil that NASA's Phoenix Mars Lander dug into this year is very cold and very dry. However, when long-term climate cycles make the site warmer, the soil may get moist enough to modify the chemistry, producing effects that persist through the colder times.

Phoenix found clues increasing scientists' confidence in predictive models about water vapor moving through the soil between the atmosphere and subsurface water-ice. The models predict the vapor flow can wet the soil when the tilt of Mars' axis, the obliquity, is greater than it is now.

The robot worked on Mars for three months of prime mission, plus two months of overtime, after landing on May 25. The Phoenix science team will be analyzing data and running comparison experiments for months to come. With some key questions still open, team members at a meeting of the American Geophysical Union today reported on their progress.

"We have snowfall from the clouds and frost at the surface, with ice just a few inches below, and dry soil in between," said Phoenix Principal Investigator Peter Smith of the University of Arizona, Tucson. "During a warmer climate several million years ago, the ice would have been deeper, but frost on the surface could have melted and wet the soil."

With no large moon like Earth's to stabilize it, Mars goes through known periodic cycles when its tilt becomes much greater than Earth's. During those high-tilt periods, the sun rises higher in the sky above the Martian poles than it does now, and the arctic plain where Phoenix worked experiences warmer summers.

"The ice under the soil around Phoenix is not a sealed-off deposit left from some ancient ocean," said Ray Arvidson of Washington University in St. Louis, lead scientist for the lander's robotic arm. "It is in equilibrium with the environment, and the environment changes with the obliquity cycles on scales from hundreds of thousands of years to a few million years. There have probably been dozens of times in the past 10 million years when thin films of water were active in the soil, and probably there will be dozens more times in the next 10 million years."

Cloddy texture of soil scooped up by Phoenix is one clue to effects of water. The mission's microscopic examination of the soil shows individual particles characteristic of windblown dust and sand, but clods of the soil hold together more cohesively than expected for unaltered dust and sand. Arvidson said, "It's not strongly cemented. It would break up in your hand, but the cloddiness tells us that something is taking the windblown material and mildly cementing it."

That cementing effect could result from water molecules adhering to the surfaces of soil particles. Or it could be from water mobilizing and redepositing salts that Phoenix identified in the soil, such as magnesium perchlorate and calcium carbonate.

"There's exchange between the atmosphere and the subsurface ice," Zent said. "A film of water molecules accumulates on the surfaces of mineral particles. It's not enough right now to transform the chemistry, but the measurements are providing verification that these molecular films are occurring when you would expect them to, and this gives us more confidence in predicting the way they would behave in other parts of the obliquity cycles."