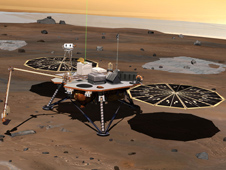 Artist's concept of Phoenix on Mars.
Full image and caption
Image archive
Animations and videos
PASADENA, Calif. -- After nearly a month of daily checks to determine whether Martian NASA's Phoenix Mars Lander would be able to communicate again, the agency has stopped using its Mars orbiters to hail the lander and listen for its beep.

The final communication from Phoenix remains a brief signal received via NASA's Mars Odyssey orbiter on Nov. 2. The Phoenix lander operated for two overtime months after achieving its science goals during its original three-month mission. It landed on a Martian arctic plain on May 25.

"The variability of the Martian weather was a contributing factor to our loss of communications, and we were hoping that another variation in weather might give us an opportunity to contact the lander again," said Phoenix Mission Manager Chris Lewicki of NASA's Jet Propulsion Laboratory, Pasadena, Calif.

The end of efforts to listen for Phoenix with Odyssey and NASA's Mars Reconnaissance Orbiter had been planned for the start of solar conjunction, when communications between Earth and Mars-orbiting spacecraft are minimized for a few week. That period, when the sun is close to the line between Earth and Mars, has begun and will last until mid-December.

The last attempt to listen for a signal from Phoenix was when Odyssey passed overhead at 3:49 p.m. PST Saturday, Nov. 29 (4:26 p.m. local Mars solar time on the 182nd Martian day, or sol, since Phoenix landed). Nov. 29 was selected weeks ago as the final date for relay monitoring of Phoenix because it provided several weeks to the chance to confirm the fate of the lander, and it coincided with the beginning of solar conjunction operations for the orbiters. When they come out of the conjunction period, weather on far-northern Mars will be far colder, and the declining sunshine will have ruled out any chance of hearing from Phoenix.

The Phoenix mission is led by Peter Smith of the University of Arizona, Tucson, with project management at JPL and development partnership at Lockheed Martin, Denver. International contributions come from the Canadian Space Agency; the University of Neuchatel, Switzerland; the universities of Copenhagen and Aarhus in Denmark; the Max Planck Institute in Germany; the Finnish Meteorological Institute; and Imperial College, London. The California Institute of Technology in Pasadena manages JPL for NASA.  Media contacts: Guy Webster 818-354-6278
Jet Propulsion Laboratory, Pasadena, Calif.
guy.webster@jpl.nasa.gov