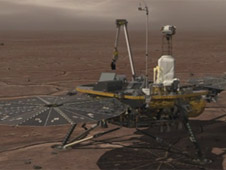 PASADENA, Calif. -- NASA's Phoenix Mars Lander has communicated with controllers daily since Oct. 30 through relays to Mars orbiters. Information received over the weekend indicates Phoenix is running out of power each afternoon or evening but reawakening after its solar arrays catch morning sunlight.

The fraction of each day with sun above the horizon is declining at the Martian arctic landing site. Dust raised by a storm last week continues to block some of the sunshine.

"This is exactly the scenario we expected for the mission's final phase, though the dust storm brought it a couple weeks sooner than we had hoped," said Phoenix Project Manager Barry Goldstein of NASA's Jet Propulsion Laboratory, Pasadena, Calif. "We will be trying to gain some additional science during however many days we have left. Any day could be our last."

Mission engineers at JPL and at Lockheed Martin Space Systems, Denver, are attempting this week to upload commands to be stored in the lander's flash memory for science activities to be conducted when the lander wakes up each day.

"Weather observations are our top priority now," said Phoenix Principal Investigator Peter Smith. "If there's enough energy, we will try to get readings from the conductivity probe that has been inserted into the soil, and possibly some images to assess frost buildup."

Phoenix landed on Mars May 25. It accomplished its main science goals during the three months originally planned as its prime mission, then continued operating, now in its sixth month.

The Phoenix mission is led by Peter Smith of the University of Arizona, Tucson, with project management at the Jet Propulsion Laboratory and development partnership at Lockheed Martin, Denver. International contributions come from the Canadian Space Agency; the University of Neuchatel, Switzerland; the universities of Copenhagen and Aarhus in Denmark; the Max Planck Institute in Germany; the Finnish Meteorological Institute; and Imperial College, London. The California Institute of Technology in Pasadena manages JPL for NASA. Media contacts: Guy Webster 818-354-6278
Jet Propulsion Laboratory, Pasadena, Calif.
Guy.Webster@jpl.nasa.gov