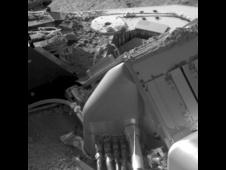 This image shows Martian soil piled on top of the spacecraft's deck and some of its instruments. Image credit: NASA/JPL-Caltech/University of Arizona/Max Planck Institute
Full image and caption
Latest images and 3D images
Animations and videos
NASA's Phoenix Mars Lander has finished scooping soil samples to deliver to its onboard laboratories, and is now preparing to analyze samples already obtained. Scientists are anxious to analyze the samples as the power Phoenix generates continues to drop. The amount of sunlight is waning on Mars' northern plains as late-summer turns to fall.

The spacecraft's robotic arm is digging into the lower portion of the "Upper Cupboard" and "Stone Soup" areas of the Phoenix worksite. Its Surface Stereoscopic Imager is taking photos of this trenching so scientists can better map out the geology of the Red Planet's ice table.

"We're basically trying to understand the depth and extent of the ice table to tie together how geology and climate control its formation," said Phoenix mission scientist Diana Blaney of NASA's Jet Propulsion Laboratory, Pasadena, Calif.

Later this week, Phoenix engineers and scientists will use the robotic arm to attempt to push a soil sample piled in a funnel on top of the lander's Wet Chemistry Laboratory into a cell for analysis. They will take images of soil captured in its Optical Microscope, as well as take digital-elevation models of a rock called "Sandman" with Phoenix's Robotic Arm Camera.

Phoenix has operated nearly five months on Mars since landing on May 25, 2008.