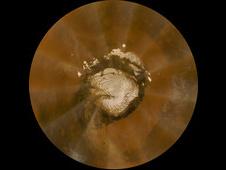 Captured in this image from Mars Reconnaissance Orbiter is a 37,000 square-kilometer (almost 14,300 miles) dust storm that moved counter-clockwise through the Phoenix landing site on Oct 11, 2008. Image credit: NASA/JPL-Caltech/Malin Space Science Systems
Full image and caption
Latest images and 3D images
Animations and videos
The Phoenix Lander over the weekend successfully weathered a regional dust storm that temporarily lowered its solar power, and the team is back investigating the Red Planet's northern plains.

The increasing opacity in the atmosphere from the storm decreased the power reaching the Phoenix's solar arrays. So on Martian days, or sols, 135-136 of the mission (Oct. 11-12), Phoenix scientists and engineers curtailed many of the lander's science activities, such as collecting some data from its onboard science laboratories.

The 37,000 square-kilometer storm (almost 14,300 square miles) moved west to east, and weakened considerably by the time it reached the lander on Saturday, Oct. 11. This tamer storm put the spacecraft in a better than expected situation, said Ray Arvidson of Washington University in St. Louis, the lead scientist for Phoenix's Robotic Arm.

Now the lander is busy meting out its power to analyze soil samples, collect atmospheric data, and conduct other activities before fall and winter stop Phoenix cold.

"Energy is becoming an issue, so we have to carefully budget our activities," Arvidson said.

The Phoenix team tracked the dust storm last week through images gleaned from the Mars Reconnaissance Orbiter's Mars Color Imager. The imager's team estimated that after the dust storm passed through Phoenix's landing site on Saturday, the dust would gradually decrease this week.

This dust storm is a harbinger of more wintry and volatile weather to come. As Martian late summer turns into fall, the Phoenix team anticipates more dust storms, frost in trenches, and water-ice clouds. They look forward to collecting data and documenting this "most interesting season," Arvidson said.

The Phoenix Mission is led by the University of Arizona, Tucson, on behalf of NASA. Project management of the mission is by NASA's Jet Propulsion Laboratory, Pasadena, Calif. Spacecraft development is by Lockheed Martin Space Systems, Denver. 2008-194
› Back To Top