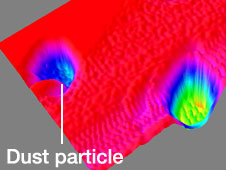 This color image is a three dimensional view of a digital elevation map of a sample collected by NASA's Phoenix Mars Lander's Atomic Force Microscope. A Martian particle -- only one micrometer, or one millionth of a meter, across -- is held in the left pit. Image credit: NASA/JPL-Caltech/University of Arizona/University of Neuchatel/Imperial College London
Full image and caption
Latest images and 3D images
Animations and videos
TUCSON, Ariz. – NASA's Phoenix Mars Lander has taken the first-ever image of a single particle of Mars' ubiquitous dust, using its atomic force microscope.

The particle -- shown at higher magnification than anything ever seen from another world -- is a rounded particle about one micrometer, or one millionth of a meter, across. It is a speck of the dust that cloaks Mars. Such dust particles color the Martian sky pink, feed storms that regularly envelop the planet and produce Mars' distinctive red soil.

"This is the first picture of a clay-sized particle on Mars, and the size agrees with predictions from the colors seen in sunsets on the Red Planet," said Phoenix co-investigator Urs Staufer of the University of Neuchatel, Switzerland, who leads a Swiss consortium that made the microscope.

"Taking this image required the highest resolution microscope operated off Earth and a specially designed substrate to hold the Martian dust," said Tom Pike, Phoenix science team member from Imperial College London. "We always knew it was going to be technically very challenging to image particles this small."

It took a very long time, roughly a dozen years, to develop the device that is operating in a polar region on a planet now about 350 million kilometers or 220 million miles away.

The atomic force microscope maps the shape of particles in three dimensions by scanning them with a sharp tip at the end of a spring. During the scan, invisibly fine particles are held by a series of pits etched into a substrate microfabricated from a silicon wafer. Pike's group at Imperial College produced these silicon microdiscs.

The atomic force microscope can detail the shapes of particles as small as about 100 nanometers, about one one-thousandth the width of a human hair. That is about 100 times greater magnification than seen with Phoenix's optical microscope, which made its first images of Martian soil about two months ago. Until now, Phoenix's optical microscope held the record for producing the most highly magnified images to come from another planet.

"I'm delighted that this microscope is producing images that will help us understand Mars at the highest detail ever," Staufer said. "This is proof of the microscope's potential. We are now ready to start doing scientific experiments that will add a new dimension to measurements being made by other Phoenix lander instruments."

"After this first success, we're now working on building up a portrait gallery of the dust on Mars," Pike added.

Mars' ultra-fine dust is the medium that actively links gases in the Martian atmosphere to processes in Martian soil, so it is critically important to understanding Mars' environment, the researchers said.

The Phoenix mission is led by Peter Smith from the University of Arizona with project management at NASA's Jet Propulsion Laboratory, Pasadena, Calif., and development partnership at Lockheed Martin, Denver. International contributions come from the Canadian Space Agency; the University of Neuchatel; the universities of Copenhagen and Aarhus in Denmark; the Max Planck Institute in Germany; and the Finnish Meteorological Institute. The California Institute of Technology in Pasadena manages JPL for NASA.