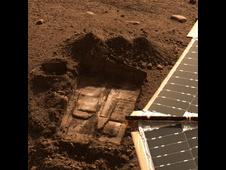 "Finding perchlorates is neither good nor bad for life, but it does make us reassess how we think about life on Mars," said Michael Hecht of NASA's Jet Propulsion Laboratory, Pasadena, Calif., lead scientist for the Microscopy, Electrochemistry and Conductivity Analyzer (MECA), the instrument that includes the wet chemistry laboratory.

If confirmed, the result is exciting, Hecht said, "because different types of perchlorate salts have interesting properties that may bear on the way things work on Mars if -- and that's a big 'if ' -- the results from our two teaspoons of soil are representative of all of Mars, or at least a significant portion of the planet."

The Phoenix team had wanted to check the finding with another lander instrument, the Thermal and Evolved-Gas Analyzer (TEGA), which heats soil and analyzes gases driven off. But as that TEGA experiment was underway last week, speculative news reports surfaced claiming the team was holding back a major finding regarding habitability on Mars.

"The Phoenix project has decided to take an unusual step" in talking about the research when its scientists are only about half-way through the data collection phase and have not yet had time to complete data analysis or perform needed laboratory work, said Phoenix principal investigator Peter Smith of the University of Arizona, Tucson. Scientists are still at the stage where they are examining multiple hypotheses, given evidence that the soil contains perchlorate.

"We decided to show the public science in action because of the extreme interest in the Phoenix mission, which is searching for a habitable environment on the northern plains of Mars," Smith added. "Right now, we don't know whether finding perchlorate is good news or bad news for possible life on Mars."

Perchlorate is an ion, or charged particle, that consists of an atom of chlorine surrounded by four oxygen atoms. It is an oxidant, that is, it can release oxygen, but it is not a powerful one. Perchlorates are found naturally on Earth at such places as Chile's hyper-arid Atacama Desert. The compounds are quite stable and do not destroy organic material under normal circumstances. Some microorganisms on Earth are fueled by processes that involve perchlorates, and some plants concentrate the substance. Perchlorates are also used in rocket fuel and fireworks.

When TEGA heated a sample of soil dug from the Dodo-Goldilocks trench on Sol 25 to high temperature, it detected an oxygen release, said TEGA lead scientist William Boynton of the University of Arizona. Perchlorate could be one of several possible sources of this oxygen, he said.

Late last week, when TEGA analyzed another sample, this one from the Snow White trench, the TEGA team looked for chlorine gas. The instrument detected none.

"Had we seen it, the identification of perchlorate would be absolutely clear, but in this run we did not see any chlorine gas. We may have been analyzing a perchlorate salt that doesn't release chlorine gas upon heating," Boynton said. "There's nothing in the TEGA data that contradicts MECA's finding of perchlorates."

As the Phoenix team continues its investigation of the artic soil, the TEGA instrument will attempt to validate the perchlorate discovery and determine its concentration and properties.

More information on Phoenix is at http://www.nasa.gov/phoenix .

The Phoenix mission is led by Smith with project management at JPL, and development partnership at Lockheed Martin, located in Denver. International contributions come from the Canadian Space Agency; the University of Neuchatel, Switzerland; the universities of Copenhagen and Aarhus in Denmark; the Max Planck Institute in Germany; and the Finnish Meteorological Institute. The California Institute of Technology in Pasadena manages JPL for NASA.