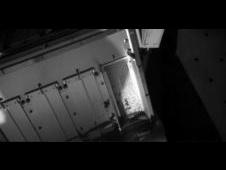 NASA's Phoenix Mars Lander collected a soil sample and attempted to deliver some of it to a laboratory oven on the deck during the mission's 62nd Martian day, or sol, (July 28, 2008). Image credit: NASA/JPL-Caltech/University of Arizona/Max Planck Institute
Full image and caption
Latest images and 3D images
Animations and videos
TUCSON, Ariz. -- Scientists and engineers on NASA's Phoenix Mars Mission spent the weekend examining how the icy soil on Mars interacts with the scoop on the lander's robotic arm, while trying different techniques to deliver a sample to one of the instruments.

"It has really been a science experiment just learning how to interact with the icy soil on Mars -- how it reacts with the scoop, its stickiness, whether it's better to have it in the shade or the sunlight," said Phoenix Principal Investigator Peter Smith of the University of Arizona.

The team tried two methods over the weekend to pick up and deliver a sample of icy soil to a laboratory oven of the Thermal and Evolved-Gas Analyzer (TEGA). In both cases, most of the sample stuck inside the lander's inverted scoop. Images returned early Monday showed a small amount of soil reached the screened opening, but other data indicated that not enough had been funneled into the oven for beginning an analysis of the composition.

Samples obtained Friday and late Sunday contained material churned up from a hard layer by the motorized rasp on the scoop. That layer is believed to include water ice mixed with the soil.

Sunday's attempt to deliver a sample to cell number zero of Phoenix's TEGA instrument used more vibration with a motor inside the scoop and held the scoop upside down over the opened doors for longer than was used on Friday. The team plans to keep gaining experience in handling the icy soil while continuing with other Phoenix studies of the soil and the atmosphere.

Smith said, "While we continue with determining the best way to get an icy sample, we intend to proceed with analyzing dry samples that we already know how to deliver. We are going to move forward with a dry soil sample."