Lander Collects Icy Soil But Needs to Work on Delivery 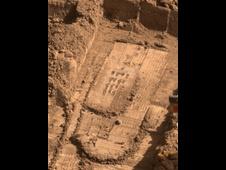 NASA's Phoenix Mars Lander used the motorized rasp on the back of its robotic arm scoop during the mission's 60th Martian day. Image credit: NASA/JPL-Caltech/University of Arizona/Texas A&M University
Full image and caption
Latest images and 3D images
Animations and videos
TUCSON, Ariz. --NASA's Phoenix Mars Lander's robotic arm collected a more than adequate amount of icy soil for baking in one of the lander's ovens but will need to adjust how it delivers samples.

Engineers determined the rasping and scraping activity collected a total of 3 cubic centimeters of icy soil, more than enough to fill the tiny oven cell of the Thermal and Evolved-Gas Analyzer, or TEGA. However, images returned from the lander Saturday morning show that much of the soil remained lodged in the robotic arm's scoop after the attempt to deliver the sample to the TEGA.

"Very little of the icy sample made it into the oven," said Barry Goldstein, Phoenix project manager from NASA's Jet Propulsion Laboratory in Pasadena, Calif. "We believe that the material that was intended for the targeted cell is the material that adhered to the back of the scoop."

Once the sample had been collected, the robotic arm tilted its scoop and ran the rasp motor several times in an attempt to sprinkle the sample into the oven whose doors were wide open. The final step was inverting the scoop directly over the doors. A screened opening over the oven measures about 10 centimeters (4 inches) long by 3 centimeters (1.5 inches) wide. The oven itself is roughly the size of an ink cartridge in a ballpoint pen.

The delivery sequence also included vibrating the screen several times, which would have aided delivery. TEGA detected that not enough sample was recorded as being in its oven, so the oven doors did not close.

The TEGA activities did not cause any short circuits with the equipment.

"The good news here is TEGA is functioning nominally, and we will adjust our sample drop-off strategy to run this again," Goldstein said.

Prior to the sample delivery, Phoenix's robotic arm made 16 holes in the hard ground with its motorized rasp tool and the scoop collected the rasped material and shavings left on the surface from the rasping action.

The lander conducted these activities overnight Friday to Saturday, Pacific Time, during Martian morning hours of the mission's 60th Martian day, or sol. The Phoenix team planned Saturday to send the spacecraft commands to take images on Sunday, the mission's Sol 61, of areas around and under the TEGA instrument. The images by the Robotic Arm Camera would be a way to check for additional material that might have been released by the scoop on Sol 60.