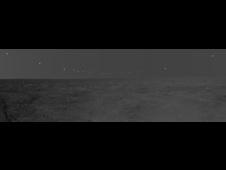 This panorama mosaic of images was taken by the Surface Stereo Imager on board NASA's Phoenix Mars Lander. This mosaic documents the midnight sun during several days of the mission. Image credit: NASA/JPL-Caltech/University of Arizona/Texas A&M University
Full image and caption
Latest images and 3D images
Animations and videos
TUCSON, Ariz. -- The latest activities of NASA's Phoenix Mars Lander have moved the mission closer to analyzing a sample of material, possibly icy soil, from a hard layer at the bottom of a shallow trench beside the lander.

Overnight Tuesday to Wednesday, during Phoenix's 57th Martian day, or sol, since landing, Phoenix used its robotic arm to scrape the top of the hard layer in the trench informally named "Snow White."

The Phoenix team prepared commands to send to the spacecraft Wednesday telling it to take color stereo images minutes after each of five more rounds of scraping during Sol 58.

"We are monitoring changes between the scrapes," said Doug Ming of NASA Johnson Space Center, Houston, the team's science lead for Sol 58 plans. "It appears that there is fairly rapid sublimation of some of the ice after scraping exposes fresh material, leaving a thin layer of soil particles that had been mixed with the ice. There's a color change from darker to bluer to redder. We want to characterize that on Sol 58 to know what to expect when we scrape just before collecting the next sample."

Within a few sols, the team plans to collect a sample from the hard layer of Snow White for delivery to one of the eight ovens of Phoenix's Thermal and Evolved-Gas Analyzer (TEGA). Doors to the oven have been opened to receive the sample.

The TEGA completed one checkout during Sol 57. Another preparation step by the instrument, a heater characterization, is planned for Sol 58, to verify that pressure sensors can be warmed enough to operate properly early in the Mars morning.

"For the next sample, we will be operating the instrument earlier in the morning than we have before," said William Boynton of the University of Arizona, lead scientist for TEGA. "It will be almost the coldest part of the day, because we want to collect the sample cold and deliver it cold."

On the day when Phoenix will deliver the next sample to TEGA, the team plans to have lander activities begin about three hours earlier than the usual start time of about 9 a.m. local solar time.

One set of imaging commands developed for use on Sol 58 or soon afterwards will check a northwestern portion of the horizon repeatedly during early afternoon to see whether any dust devils can be seen. This will be the first systematic check by Phoenix for dust devils. Similar imaging sequences have observed dust devils near NASA's Mars Rover Spirit, south of Mars' equator.

Students from Boulder Creek High School, Anthem, Ariz., worked with Phoenix team members to plan the first monitoring for dust devils by the lander's Surface Stereo Imager. They and students from SciTech High School, San Diego, are interns at the Phoenix mission's Science Operations Center in Tucson this week, part of a series of internship visits from 12 schools this summer by schools in Arizona, Arkansas, California, Iowa, Massachusetts, New Hampshire, Pennsylvania and Texas.