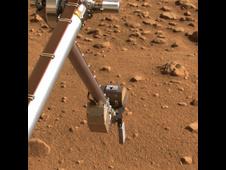 The planned test is a preparation for putting a similar sample into one of Phoenix's laboratory ovens in coming days. The instrument with the oven, the Thermal and Evolved- Gas Analyzer (TEGA), will be used to check whether the hard layer exposed in a shallow trench is indeed rich in water ice, as scientists expect, and to identify some other ingredients in the frozen soil.

The rasp flings some of the shavings that it produces directly into an opening on the back of the scoop at the end of the lander's robotic arm. The test planned for today differs in several ways from the first test of the rasp on Mars, on July 15.

"First, we will scrape the terrain before rasping, to expose fresh terrain for sampling," said Richard Volpe of NASA's Jet Propulsion Laboratory, Pasadena, Calif., an engineer for the Phoenix robotic arm team. "Second, we will rasp four times in a row, twice the amount previously. Third, the scoop blade will be run across the rasp holes to pick up as much of the tailings as possible."

The test area is in the bottom of a trench about 5 centimeters (2 inches) deep, informally named "Snow White," which is also the planned site for acquiring an icy sample for the TEGA instrument. The team wants to be sure to be able to collect and deliver the sample quickly, and early in the Martian morning, in order to minimize the amount of ice lost to vaporization before the material is sealed into the oven. Today's plans include using the Robotic Arm Camera to check repeatedly for any changes in the collected sample during seven hours after getting it into the scoop.