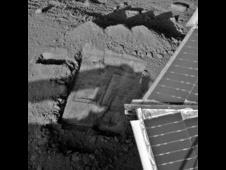 This image was acquired by NASA's Phoenix Mars Lander's Surface Stereo Imager on the 44th Martian day of the mission, or Sol 43 (July 7, 2008), after the May 25, 2008, landing, showing the current sample scraping area in the trench informally called "Snow White." Image credit: NASA/JPL-Caltech/University of Arizona/Texas A&M University
Full image and caption
Latest images
Animations and videos
TUCSON, Ariz. -- NASA's Phoenix Mars Lander's science and engineering teams are testing methods to get an icy sample into the Robotic Arm scoop for delivery to the Thermal and Evolved Gas Analyzer (TEGA).

Ray Arvidson of Washington University in St. Louis, Phoenix's "dig czar," said the hard Martian surface that Phoenix has reached proved to be a difficult target, comparing the process to scraping a sidewalk.

"We have three tools on the scoop to help access ice and icy soil," Arvidson said. "We can scoop material with the backhoe using the front titanium blade; we can scrape the surface with the tungsten carbide secondary blade on the bottom of the scoop; and we can use a high-speed rasp that comes out of a slot at the back of the scoop."

"We expected ice and icy soil to be very strong because of the cold temperatures. It certainly looks like this is the case and we are getting ready to use the rasp to generate the fine icy soil and ice particles needed for delivery to TEGA," he said.

"It's like trying to pick up dust with a dustpan, but without a broom," said Richard Volpe, an engineer from NASA's Jet Propulsion Laboratory, Pasadena, Calif., on Phoenix's Robotic Arm team.

Images from the lander's Robotic Arm Camera showed that the scoop remained empty after two sets of 50 scrapes performed earlier Monday were collected into two piles in the trench informally named "Snow White." These activities were a test of possible techniques for collecting a sample of ice or ice-rich soil for analysis.

The mission teams are now focusing on use of the motorized rasp within the Robotic Arm scoop to access the hard icy soil and ice deposits. They are conducting tests on Phoenix's engineering model in the Payload Interoperability Testbed in Tucson to determine the optimum ways to rasp the hard surfaces and acquire the particulate material produced during the rasping. The testbed work and tests on Mars will help the team determine the best way to collect a sample of Martian ice for delivery to TEGA.

The Phoenix mission is led by Peter Smith of the University of Arizona with project management at JPL and development partnership at Lockheed Martin, Denver. International contributions come from the Canadian Space Agency; the University of Neuchatel, Switzerland; the universities of Copenhagen and Aarhus, Denmark; Max Planck Institute, Germany; and the Finnish Meteorological Institute. For more about Phoenix, visit: http://www.nasa.gov/phoenix and http://phoenix.lpl.arizona.edu. Media contacts: Guy Webster 818-354-6278
Jet Propulsion Laboratory, Pasadena, Calif.
guy.webster@jpl.nasa.gov