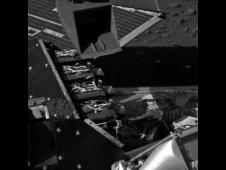 This image shows the lander's Robotic Arm scoop positioned over the Wet Chemistry Lab Cell 1 delivery funnel on July 6, 2008, after a soil sample was delivered to the instrument. The instrument's Cell 1 is second one from the foreground of the image. The first cell, Cell 0, received a soil sample two weeks earlier.
Full image and caption
Latest images
Animations and videos

Results from testing this sample will be compared in coming days to the results from the first Martian soil analyzed by the wet chemistry laboratory two weeks ago. That laboratory is part of Phoenix's Microscopy, Electrochemistry and Conductivity Analyzer.

The main activity on the lander's schedule for today is testing a method for scraping up a sample of icy material and getting it into the scoop at the end of the Robotic Arm. Photography before, during and after the process will allow evaluation of this method. If the test goes well, the science team plans to use this method for gathering the next sample to be delivered to Phoenix's bake-and-sniff instrument, the Thermal and Evolved-Gas Analyzer.

The Phoenix mission is led by Peter Smith of The University of Arizona with project management at JPL and development partnership at Lockheed Martin, located in Denver. International contributions come from the Canadian Space Agency; the University of Neuchatel, Switzerland; the universities of Copenhagen and Aarhus, Denmark; Max Planck Institute, Germany; and the Finnish Meteorological Institute. For more information on the Phoenix, visit http://www.nasa.gov/phoenix and http://phoenix.lpl.arizona.edu. Media contacts: Guy Webster 818-354-6278
Jet Propulsion Laboratory, Pasadena, Calif.
guy.webster@jpl.nasa.gov