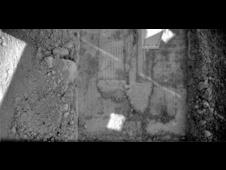 NASA's Phoenix Mars Lander enlarged the "Snow White" trench and scraped up little piles of icy soil on Saturday, June 28, the 33rd Martian day, or sol, of the mission. Scientists say that the scrapings are ideal for the lander's analytical instruments.

The robotic arm on Phoenix used the blade on its scoop to make 50 scrapes in the icy layer buried under subsurface soil. The robotic arm then heaped the scrapings into a few 10- to 20-cubic centimeter piles, or piles each containing between two and four teaspoonfuls. Scraping created a grid about two millimeters deep.

The scientists saw the scrapings in Surface Stereo Imager images on Sunday, June 29, agreed they had "almost perfect samples of the interface of ice and soil," and commanded the robotic arm to pick up some scrapings for instrument analysis.

The scoop will sprinkle the fairly fine-grained material first onto the Thermal and Evolved-Gas Analyzer (TEGA). The instrument has tiny ovens to bake and sniff the soil to assess its volatile ingredients, such as water. It can determine the melting point of ice.

Phoenix's overall goals are to: dig to water frozen under subsurface soil, touch, examine, vaporize and sniff the soil and ice to discover the history of water on Mars, determine if the Martian arctic soil could support life, and study Martian weather from a polar perspective.