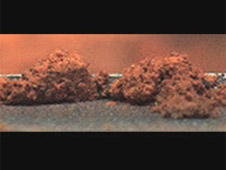 NASA's Phoenix Mars Lander performed its first wet chemistry experiment on Martian soil flawlessly yesterday, returning a wealth of data that for Phoenix scientists was like winning the lottery.

"We are awash in chemistry data," said Michael Hecht of NASA's Jet Propulsion Laboratory, lead scientist for the Microscopy, Electrochemistry and Conductivity Analyzer, or MECA, instrument on Phoenix. "We're trying to understand what is the chemistry of wet soil on Mars, what's dissolved in it, how acidic or alkaline it is. With the results we received from Phoenix yesterday, we could begin to tell what aspects of the soil might support life."

"This is the first wet-chemical analysis ever done on Mars or any planet, other than Earth," said Phoenix co-investigator Sam Kounaves of Tufts University, science lead for the wet chemistry investigation.

About 80 percent of Phoenix's first, two-day wet chemistry experiment is now complete. Phoenix has three more wet-chemistry cells for use later in the mission.

"This soil appears to be a close analog to surface soils found in the upper dry valleys in Antarctica," Kouvanes said. "The alkalinity of the soil at this location is definitely striking. At this specific location, one-inch into the surface layer, the soil is very basic, with a pH of between eight and nine. We also found a variety of components of salts that we haven't had time to analyze and identify yet, but that include magnesium, sodium, potassium and chloride."

"This is more evidence for water because salts are there. We also found a reasonable number of nutrients, or chemicals needed by life as we know it," Kounaves said. "Over time, I've come to the conclusion that the amazing thing about Mars is not that it's an alien world, but that in many aspects, like mineralogy, it's very much like Earth."

Another analytical Phoenix instrument, the Thermal and Evolved-Gas Analyzer (TEGA), has baked its first soil sample to 1,000 degrees Celsius (1,800 degrees Fahrenheit). Never before has a soil sample from another world been baked to such high heat.

TEGA scientists have begun analyzing the gases released at a range of temperatures to identify the chemical make-up of soil and ice. Analysis is a complicated, weeks-long process.

But "the scientific data coming out of the instrument have been just spectacular," said Phoenix co-investigator William Boynton of the University of Arizona, lead TEGA scientist.

"At this point, we can say that the soil has clearly interacted with water in the past. We don't know whether that interaction occurred in this particular area in the northern polar region, or whether it might have happened elsewhere and blown up to this area as dust."

Leslie Tamppari, the Phoenix project scientist from JPL, tallied what Phoenix has accomplished during the first 30 Martian days of its mission, and outlined future plans.

The Stereo Surface Imager has by now completed about 55 percent of its three-color, 360-degree panorama of the Phoenix landing site, Tamppari said. Phoenix has analyzed two samples in its optical microscope as well as first samples in both TEGA and the wet chemistry laboratory. Phoenix has been collecting information daily on clouds, dust, winds, temperatures and pressures in the atmosphere, as well as taking first nighttime atmospheric measurements.

Lander cameras confirmed that white chunks exposed during trench digging were frozen water ice because they sublimated, or vaporized, over a few days. The Phoenix robotic arm dug and sampled, and will continue to dig and sample, at the 'Snow White' trench in the center of a polygon in the polygonal terrain.

"We believe this is the best place for creating a profile of the surface from the top down to the anticipated icy layer," Tamppari said. "This is the plan we wanted to do when we proposed the mission many years ago. We wanted a place just like this where we could sample the soil down to the possible ice layer."