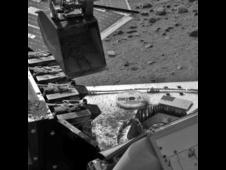 This image taken by the Surface Stereo Imager on NASA's Phoenix Mars Lander shows the lander's Robotic Arm scoop positioned over the Wet Chemistry Lab delivery funnel on Sol 29, the 29th Martian day after landing, or June 24, 2008. Image credit: NASA/JPL-Caltech/University of Arizona/Texas A&M University
Full image and caption TUCSON, Ariz. -- NASA's Phoenix Mars Lander placed a sample of Martian soil in the spacecraft's wet chemistry laboratory today for the first time. Results from that instrument, part of Phoenix's Microscopy, Electrochemistry and Conductivity Analyzer, are expected to provide the first measurement of the acidity or alkalinity of the planet's soil.

The analysis of this soil sample and others will help researchers determine whether ice beneath the soil ever has melted, and whether the soil has other qualities favorable for life.

The Phoenix team is discussing what sample to deliver next to the lander's other analytical instrument, which bakes and sniffs soil to identify volatile ingredients. Engineers have identified possible problems in the mechanical and electrical operation of that instrument, the Thermal and Evolved-Gas Analyzer, or TEGA.

Scientists are studying information provided by TEGA's analysis of the first Martian soil sample put in that instrument. The instrument has eight single-use oven cells; each cell can analyze one sample. When doors for a second TEGA oven were commanded open last week, the doors opened only partway. Later, the team determined that mechanical interference may prevent doors on that oven and three others from opening fully. The remaining three ovens are expected to have one door that opens fully and one that opens partially, as was the case with the first oven used.

"The tests we have done in our test facility during the past few days show the robotic arm can deliver the simulated Martian soil through the opening with the doors in this configuration," said William Boynton of the University of Arizona, Tucson, lead scientist for TEGA. "We plan to save the cells where doors can open wider for accepting ice samples."

Scientists believe the first soil sample delivered to TEGA was so clumpy that soil particles clogged a screen over the opening. Four days of vibration eventually succeeded at getting the soil through the screen. However, engineers believe the use of a motor to create the vibration may also have caused a short circuit in wiring near that oven. Concern about triggering other short circuits has prompted the Phoenix team to be cautious about the use of other TEGA oven cells.

Subsequent soil samples for TEGA will be delivered with a different method than the first. The new method will sprinkle soil into the instrument to make it easier for particles to get through the screens.

The Phoenix mission is led by Peter Smith at the University of Arizona with project management at NASA's Jet Propulsion Laboratory in Pasadena, Calif., and the development partnership at Lockheed Martin in Denver. International contributions are from the Canadian Space Agency; the University of Neuchatel, Switzerland; the universities of Copenhagen and Aarhus, Denmark; Max Planck Institute, Germany; and the Finnish Meteorological Institute.