Bright Chunks at Phoenix Lander's Mars Site Must Have Been Ice 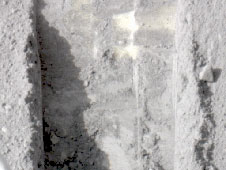 TUCSON, Ariz. – Dice-size crumbs of bright material have vanished from inside a trench where they were photographed by NASA's Phoenix Mars Lander four days ago, convincing scientists that the material was frozen water that vaporized after digging exposed it.

"It must be ice," said Phoenix Principal Investigator Peter Smith of the University of Arizona, Tucson. "These little clumps completely disappearing over the course of a few days, that is perfect evidence that it's ice. There had been some question whether the bright material was salt. Salt can't do that."

The chunks were left at the bottom of a trench informally called "Dodo-Goldilocks" when Phoenix's Robotic Arm enlarged that trench on June 15, during the 20th Martian day, or sol, since landing. Several were gone when Phoenix looked at the trench early today, on Sol 24.

Also early today, digging in a different trench, the Robotic Arm connected with a hard surface that has scientists excited about the prospect of next uncovering an icy layer.

The Phoenix science team spent Thursday analyzing new images and data successfully returned from the lander earlier in the day.

Studying the initial findings from the new "Snow White 2" trench, located to the right of "Snow White 1," Ray Arvidson of Washington University in St. Louis, co-investigator for the robotic arm, said, "We have dug a trench and uncovered a hard layer at the same depth as the ice layer in our other trench."

On Sol 24, Phoenix extended the first trench in the middle of a polygon at the "Wonderland" site. While digging, the Robotic Arm came upon a firm layer, and after three attempts to dig further, the arm went into a holding position. Such an action is expected when the Robotic Arm comes upon a hard surface.

Meanwhile, the spacecraft team at Lockheed Martin Space Systems in Denver is preparing a software patch to send to Phoenix in a few days so scientific data can again be saved onboard overnight when needed. Because of a large amount a duplicative file-maintenance data generated by the spacecraft Tuesday, the team is taking the precaution of not storing science data in Phoenix's flash memory, and instead downlinking it at the end of every day, until the conditions that produced those duplicative data files are corrected.

"We now understand what happened, and we can fix it with a software patch," said Phoenix Project Manager Barry Goldstein of NASA's Jet Propulsion Laboratory, Pasadena. "Our three-month schedule has 30 days of margin for contingencies like this, and we have used only one contingency day out of 24 sols. The mission is well ahead of schedule. We are making excellent progress toward full mission success."

The Phoenix mission is led by Smith of the University of Arizona with project management at JPL and development partnership at Lockheed Martin, located in Denver. International contributions come from the Canadian Space Agency; the University of Neuchatel, Switzerland; the universities of Copenhagen and Aarhus, Denmark; Max Planck Institute, Germany; and the Finnish Meteorological Institute. For more about Phoenix, visit: http://www.nasa.gov/phoenix and http://phoenix.lpl.arizona.edu. Media contacts: Guy Webster 818-354-6278
Jet Propulsion Laboratory, Pasadena, Calif.
guy.webster@jpl.nasa.gov