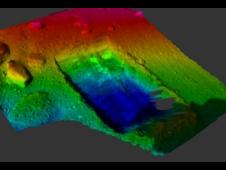 TUCSON, Ariz. – One of the ovens on NASA's Phoenix Mars Lander continued baking its first sample of Martian soil over the weekend, while the Robotic Arm dug deeper into the soil to learn more about white material first revealed on June 3.

"The oven is working very well and living up to our expectations," said Phoenix co-investigator Bill Boynton of the University of Arizona, Tucson. Boynton leads the Thermal and Evolved-Gas Analyzer (TEGA), or oven instrument, for Phoenix.

Phoenix has eight separate tiny ovens to bake and sniff the soil and look for volatile ingredients, such as water. This baking is performed at three different temperature ranges.

"We have continued to excavate in the Dodo-Goldilocks trench to expose more of the light-toned material, and we will monitor the site," said Robotic Arm lead scientist Ray Arvidson of the University of Washington, St. Louis. "If the material is ice, it should change with time. Frost may form on it, or it could slowly sublimate." Sublimation is the process where a solid changes directly into gas.

The Dodo-Goldilocks trench is 22 centimeters wide (8.7 inches) and 35 centimeters long (13.8 inches). The trench is seven to eight centimeters (2.7 to 3 inches) deep at its deepest. The deepest portion is closest to the lander.

The white material is located only at the shallowest part of the trench, farthest from the lander, indicating that it is not continuous throughout the excavated site. The trench might be exposing a ledge, or only a portion of a slab, of the white material, according to scientists.