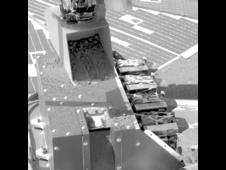 The Robotic Arm on Phoenix has just delivered the first sample of dug-up soil to the spacecraft's microscope station in this image taken during the mission's Sol 17 (June 12), or 17th Martian day after landing. Image credit: NASA/JPL-Caltech/University of Arizona/Texas A&M University
› Full image and caption
› Latest press and raw images
› Latest videos

"It looks like a light dusting and that's just what we wanted. The Robotic Arm team did a great job," said Michael Hecht of NASA's Jet Propulsion Laboratory, Pasadena, Calif. He is the lead scientist for the Microscopy, Electrochemistry and Conductivity Analyzer (MECA) instrument on Phoenix.

The delivery of scooped-up soil for inspection by the lander's Optical Microscope, a component of MECA, marks the second success in consecutive days for getting samples delivered to laboratory instruments on Phoenix's deck. Some soil from an earlier scoopful reached a tiny oven in another instrument on Tuesday, as confirmed in data received early Wednesday. That instrument is the Thermal and Evolved-Gas Analyzer, or TEGA. Commands being sent to Phoenix today include instructions to close TEGA oven number 4 and begin analyzing the sample inside, a process that will take several days.

The soil now in the microscope station came from the same scoopful that was used for a practice run of the sprinkle delivery technique on Monday. That scoopful has the informal name "Mama Bear." The sample delivered to TEGA oven 4 has the informal name "Baby Bear." Both came from a trench now called "Goldilocks" but earlier referred to as Baby Bear, on the northwest side of the lander.

The Phoenix team assembled at the University of Arizona plans to command the Robotic Arm in the next day or two to dig deeper into the Goldilocks trench and an adjacent trench called "Dodo" to determine the depth to an underlying layer of hard material that may be ice.