NASA's Phoenix Lander has an Oven Full of Martian Soil 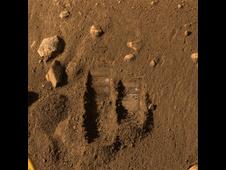 TUCSON, Ariz. - NASA's Phoenix Mars Lander has filled its first oven with Martian soil. "We have an oven full," Phoenix co-investigator Bill Boynton of the University of Arizona, Tucson, said today. "It took 10 seconds to fill the oven. The ground moved."

Boynton leads the Thermal and Evolved-Gas Analyzer instrument, or TEGA, for Phoenix. The instrument has eight separate tiny ovens to bake and sniff the soil to assess its volatile ingredients, such as water.

The lander's Robotic Arm delivered a partial scoopful of clumpy soil from a trench informally called "Baby Bear" to the number 4 oven on TEGA last Friday, June 6, which was 12 days after landing.

A screen covers each of TEGA's eight ovens. The screen is to prevent larger bits of soil from clogging the narrow port to each oven so that fine particles fill the oven cavity, which is no wider than a pencil lead. Each TEGA chute also has a whirligig mechanism that vibrates the screen to help shake small particles through.

Only a few particles got through when the screen on oven number 4 was vibrated on June 6, 8 and 9.

Boynton said that the oven might have filled because of the cumulative effects of all the vibrating, or because of changes in the soil's cohesiveness as it sat for days on the top of the screen.

"There's something very unusual about this soil, from a place on Mars we've never been before," said Phoenix Principal Investigator Peter Smith of the University of Arizona. "We're interested in learning what sort of chemical and mineral activity has caused the particles to clump and stick together." 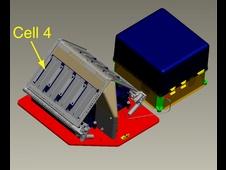 This is a computer-aided drawing of the Thermal and Evolved-Gas Analyzer, or TEGA, on NASA's Phoenix Mars Lander. Image credit: Image credit: University of Arizona
› Full image and caption
Plans prepared by the Phoenix team for the lander's activities on Thursday, June 12 include sprinkling Martian soil on the delivery port for the spacecraft's Optical Microscope and taking additional portions of a high-resolution color panorama of the lander's surroundings.